First off - my friend Preston got married on Friday. FRIDAY! At 5! In my mind - that sounds like happy hour! Just kidding. Kind of. Anyway - Preston and Lauren where married at Eden State Park which was beauitful. They got married under HUGE trees that had Spanish Moss hanging from them...the scene was breath taking. We could not ask for better weather for such a fun occasion. And everyone was there. And so was the wine. Jason kept on filling up my glass and the next thing I knew...it was 9. So big J and I took off - and made it back to my house. 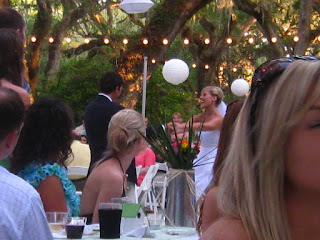 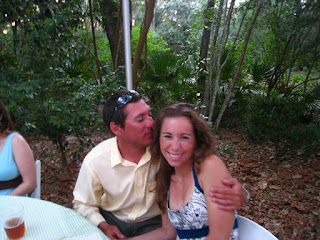 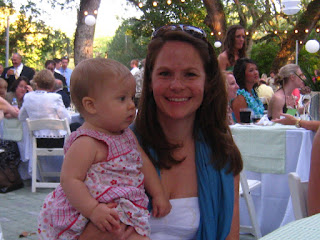 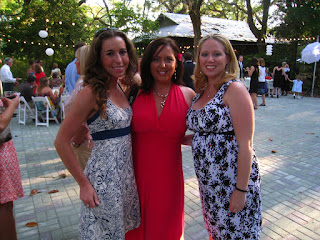 Dishman (my awesome friend from Missouri who was in town) was hanging out at the house waiting for us to get home. I threw everything that I needed for Saturday (hopefully) into a bag - he threw our bikes onto the car and we headed to Jason's. Jason lives about 45 min away from Mexico Beach - we stayed there so we would not have to get up as early. Needless to say - we did not get to bed until around midnight. WAY WAY past my normal 9:30 bedtime! The 4:30 alarm came pretty quickly. 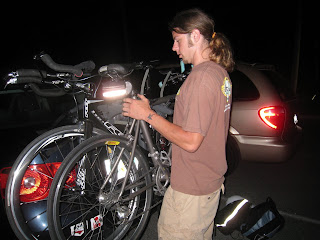 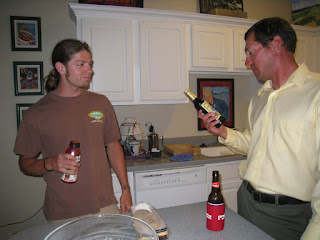 Me with a sleepy kind of hung over feeling and Dishman not to far behind made it to Mexico Beach, got everything set up (thankfully I didn't forget anything) and headed down to the beach. The gulf was nice and flat and the sun was just starting to come out. What a perfect day for a triathlon. 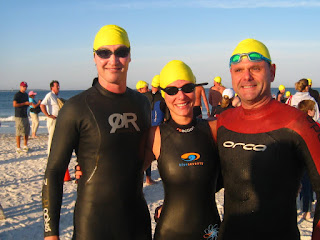 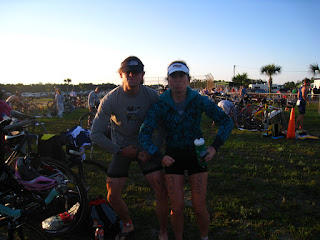 They had several distances - oly, sprint, du, du sprint...but it was two group starts. We didn't hear anything - just the gun going off. Ran into the water and took off. We had to swim out and around two bouys - which is always cluster (you know what). But I got into my grove and just faught my way through. No joke, it's like a 1/4 of a mile trek to transition.

After the long ass run - I made found my bike and took off. This is the best bike course ever. Out and back. No traffic. Once nice hill. Ahhh...perfect. So I just cruised along and focused on my speed. Thinking to myself - 15 miles! That's nothing compaired to my last race! I spotted Dishman heading back and he was going mock 10 down the hill. Super proud of him because he was in 2nd place. No females passed me until about the last mile on the bike - but knew I would catch them on the run.

Made it back to transition - threw on my garmin, hat, and my new sweet K Swiss racing flats and ran. Ran my heart out. It felt great. I can't believe how good my legs felt. I spotted my two targets and took them out. Spotted some guy with sweet tatoos and took him out as well. Saw Dishman and gave him a high five..and he was still rocking 2nd. I could not spot the 1st or 2nd place female - so I just kept the same pace and hoped for the best - with a smile on my face. Saw the rest of the awesome guys I train with who where starting the run for the Oly distance and cheered them on. Crossed the finish line with a time of 1:28.26. :) 3rd female over all. Dishman ROCKED out 2nd maile overall!

Dishman and I hung out and cheered everyone else crossing the finish line - and then did the normal thing after a race. Drank beer and ate grilled shrip with everyone! I LOVE going to races and knowing so many people there. It's a great feeling - everyone is on an awesome high and just loving life. 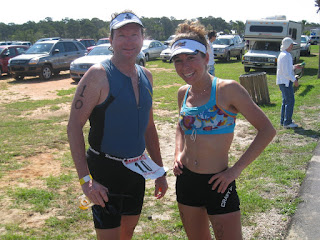 Jeff and I. Jeff is a super stud and raced Pensacola on Sunday!! 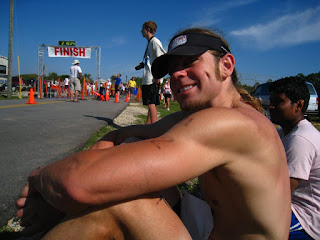 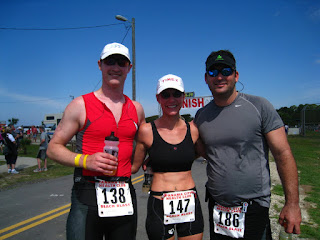 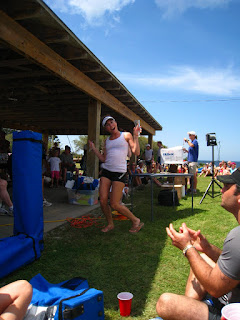 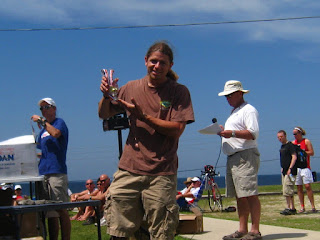 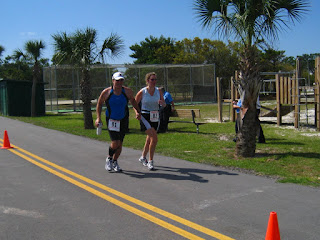 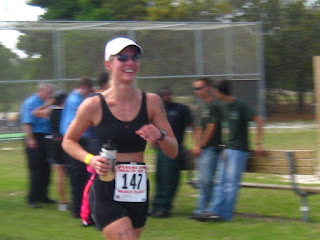 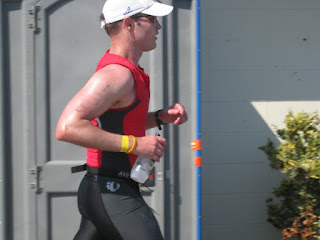 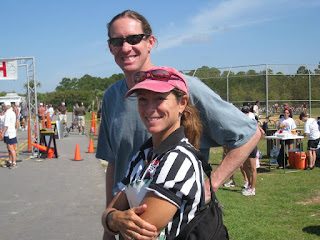 All and all it was wonderful race. Everyone did awesome and had a great time. A keg and grilled shrimp at the post party - and I some how one the jackpot of the huge container of Cytomax. Whoohoo!

Random Thoughts:
Rock of Love Bus? Thumbs down. Boo Brett.
Daisy of Love? Not sure if I will get into that.
I think I have found the perfect shower cap for the Snoop concert!
My brother sent us a universal remote for our big tv. Not sure what happend to the old one. BUT there was no instructions. Nothing. How the heck to you program it to your tv? Thanks for the sweet remote Andrew - but I'll be googling this one for awhile!
THIS GUY: 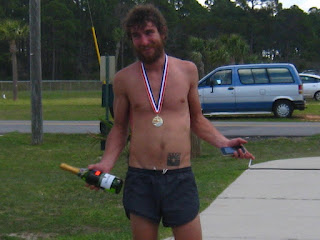 WAS AWESOME! Finished the race with style! Hahahah!!
Hope everyone had a great weekend!!!
Posted by Chloe

Wow, congrats all around on the race! You did awesome and it sounds like a great day overall. Nice job!! Beautiful photos.

Hmmmm. Drink lots of wine, don't get enough sleep, race your ass off and do great! Maybe I should try that next time....

So pre-race drinking looks like your secret weapon. WOW - 3rd!! And free Cytomax?! That stuff's like gold. Nice work!

During my last sprint I though the same thing - 15 miles ain't nothin compared to my last race. Ha ha.

Did you celebrate with more wine? :)

So many thing to comment on!:
1) um, you totally kicked-ass racing while hung over! Hello! Way to go. And very impressive you can pack after a wedding and not forget a single thing.
2) really nice photos, it looks and sounds like the wedding was in a beautiful location. I love the paper lanterns in the background.
3) ROL Bus: Total let-down. And even the reunion show was lame. Lame!
4) I just watched the rest of Daisy O.Love, it took me two tries, feel the same way, not sure if I can do it. I'm very sad "Tough Love" is almost done.
5) shower cap: photo please!
6) you should come out to Colorado and do a 'training trip' or even a race. AT, KK and I will take you up some fun mountain rides! Fee place to stay ;-)
7) have a great week!

Nice job at the race. Way to target people and hunt them down. Looks like it was a beautiful day for a tri!

Hungover racing AND you took 3rd. Damn girl, your awesome. Seriously - I could barely muster up an 8 mile run saturday morning and here you are doing a freakin triathlon. Way to go.

Nice pics. your adorable. espcially the cute little swimsuit top over a sports bra. Very stylish! I could never think of cute things like that.

Awesome job! What a perfect weekend.

It snowed here this weekend :-((

Nice finish!! And you look cute doing it.

Awesome Job! I hear great things about the Kswiss shoes - do you love them?

Way to kick ass and take names AND with a little red wine headache on top of it!? Nothing better to purge your system, work it OUT, literally.

I always love the hairy half hippie looking guys at a race (usually with lots of tats)- they're very unassuming but usually kick some ass.

way to kick ass!!! you look great! and don't you LOVE your craft tri-shorts? i love craft. good job chloe.

Tri party guy Ryan with the Champange and cig was TOO MUCH...he said he had one prerace cig in the morning and five cigs an hour after the triathlon.

hahaha very impressive! rock on chloe :) ps my pr in college cross country was racing hung over too... still a mystery to me! but way to go!