...and totally by mistake. The whole plan for this morning was to get up around 5:30 and meet Kelly (aka - one of the best training partners/ultra marathoners out there!) at 7 at Seaside for a stellar 10 mile run. Well - I shot up and grabbed my trusty I phone to see what time it is. CRAP! Why won't it turn on!?!? Ahhh! It's dead? What!?!? The sun is up! What time is it? I grabbed big J's phone about ready to have a heart attack..and what do I see? 6:38. Ok. I can't sleep past 7 if my life depended on it. But still...I was late.

So I ran down stairs - grabbed my other phone to call up Kelly. Thankfully she was just about ready to jump into her car to meet me. No biggie. She just ran from home - and I did the same. Instead of have stimulating conversation - we where stuck with our I-pods. Oh well :) It happens.

So after that mini-breakdown, I threw on my running shoes and took off. Right now I'm hooked on 'fist pumping good time' house music when I run - which I've found some pretty awesome pod-casts to listen to. I just turn it up and zone out. The weather was perfect - 49, sunny, but there was some wind. Wonderful morning for a run.

I felt amazing. My goal pace was 8:50 avg - but I ended up at 8:40 for the 10 miles, which is my goal pace for ING at the end of the January. I was on cloud nine once I hit home. For the past two years or so, I have always ran with a group of people. But it's amazing what your body can do when you are by yourself. No pressure - except for your own goals.

Anyway - after the run, I had to knock out a few domestic duties before everyone else in Panama City Beach woke up. So I stopped at a gas station hoping for chocolate soy milk for a little post run treat. All they had was chocolate milk...ummm...my body is not a fan of milk. So I ended up getting muscle milk. This is new to me, but it is lactose free and full of protein. Why not give it a try? Gross. Ugh. Never again. I'd rather risk it with the milk next time. 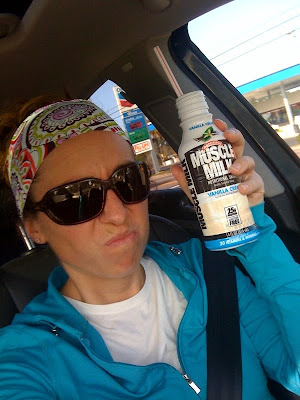 Also - did anyone else watch KONA on tv today? It was great! But also the same old same old. I really wish NBC sports would put just a litte more focus on age groupers. We all know who won...and that they are amazing athletes no doubt! But give us some normal people! :) Also, the guy off of biggest loser? He did finish the race...just over (like by a few minutes) from the run cutoff. I really wish they would have mentioned that. And yes...I did have tears in my eyes!! (and if you watched it...I know you did too!)

The new year is right around the corner, what are you going to do that will make 2010 different then any other year? After reading Missy's 12 Challenges for 2009 last year - I was blown away. Why not make a challenging list to start of the new year...but better yet, not only make it a challenge, make it AWESOME.

Wow. What an amazing concept. Kind of puts some pressure on you if you have an 'I will' list. I mean, I wish is one thing..but I will? What would you put on an 'I Will' list to kick off the new year? I have items in mind..but I will need to fine tune a few before I post them. Maybe I can find an App for my IPhone to keep my ass in gear? :)

I found my new guilty pleasure to replace Rock of Love. Jersey Shore. I know I know, cheesey - but they crack me up. I have learned a few things though...one being that I would never fit in at the Jersey Shore and there is no way I could go out until 4am everyday for a fist pumping good time - but I might be able to get my hair high enough. Maybe... 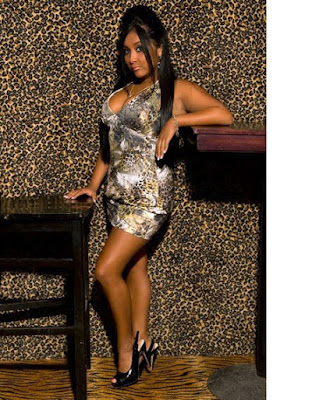 ...ok. Maybe not. BUT at least I will have a sweet nick name thanks to this LINK Just call me The Opportunity. :)

Don't forget!! KONA will be on ABC tomorrow (Saturday) at 3:30 central time!!
Posted by Chloe 4 comments: 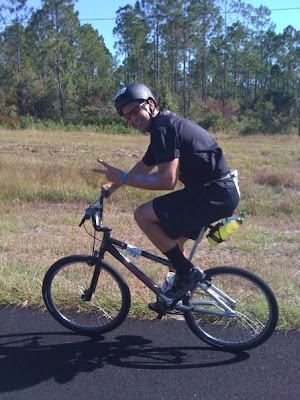 Well, I got an E-mail from him. His name is Glen Jusczyk. It ends up that he is the 'Old School Ironman'. Per his WEBSITE this is how he rocks out his races...

HOW FREAKING AWESOME IS THAT?

Check out his site because he also raises money for some great non-profits.

In other news...Big J totally hooked it up with the most amazing dinner tonight.. 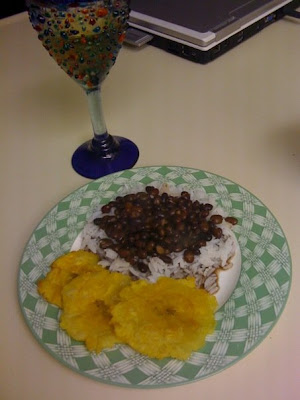 Why won't the car start?

Before I dive into what happened over the weekend, I would like to thank everyone for the help with my 'tight ass' issue from my last post. I have been focusing on my stretching and my runs have felt better. You guys are awesome!

So Big J and I headed down to Lake Mary (Orlando) this past weekend for my work Christmas Party. It was great to meet every ones significant other and see everyone all dressed up senior prom style. But since I do live in 6 hours away, it's a weekend ordeal. So after drinking all weekend (did I mention that our company also owns an Irish Pub...that is walking distance from the hotel that we always stay in) and having a good time. 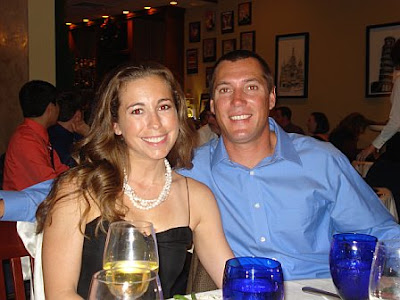 Anyway, Sunday we where cruising home and we stopped at one of those weird turnpike rest stops. For those of you who live in Florida, you know what I'm talking about. For those of you who don't, it a stop in the middle of the turnpike where you can get anything from gas to KFC to a bag of oranges and even tickets to Walt Disney World. So we hop back into the Jetta, and it won't start. Are you kidding me. We are 5 hours away from home.

So Big J has me go in to the 'wal-mart of gas stations' to get a coke. Who knew that coke would eat away corrosion on a battery? Gross. I'm never going to drink a soda again. Ever. Anyway, that did not work. Crap. So we go to the gas station 'section' and the attendant calls some super secret guy. And this guy shows up... 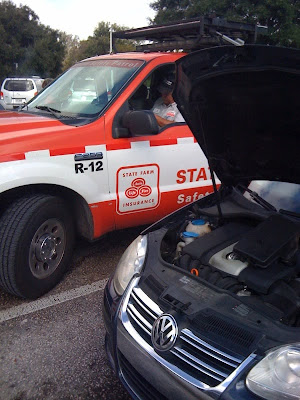 Ahh! The sky opened up and the sun shown down on this blessed man. He gave us a jump...and we where on our way! 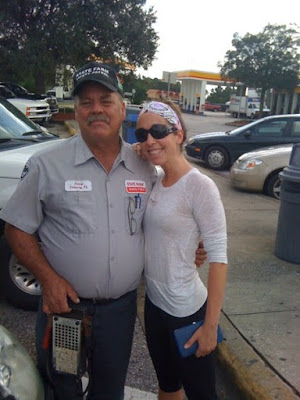 Hope everyone had a good weekend!
Posted by Chloe 6 comments:

Ok, I've been very lucky to have never have any major running injury. And I've been playing this game for quite awhile now. But lately, right below my hip bones (side butt area?) I've been stiff/just a bit of pain, in both legs. Not so bad that I am unable to run, but it's just really annoying. Anyway, it used to hit me around mile 12 or so. But yesterday, it kicked in around mile 5 of a 7 mile run. Anyone else have his tightness? I'm going to start up yoga again, hoping that this will help out. :)

Random picture of the day - 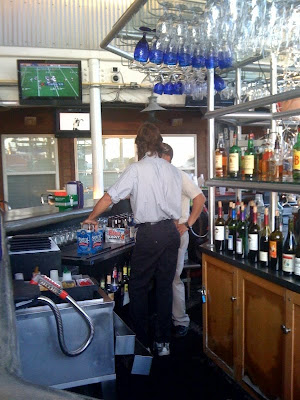 You KNOW you are in Panama City Beach when you see this awesomeness! Business in the front...party in the back!
Posted by Chloe 12 comments:

The princess will be happy

For the past year or so that I've been 'biking' I have taken the old school route of shoving my bike into the back of the Jetta or the FJ. Well, it's becoming more and more of a pain. And I don't want to crack the princess. So Christmas came early for me... 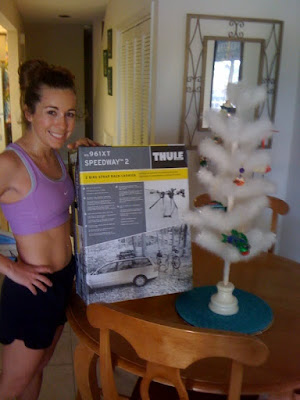 Bike rack! Whoohoo! Thanks UPS man! And how do you like the fuzzy Christmas tree with the sweet fish ornaments? And as you can see, Jason was pretty excited about putting the bad boy together: 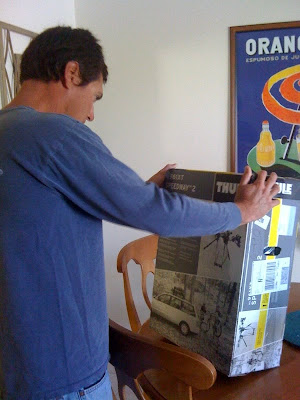 So now the princess has a new chariot.

But not only was there a bike rack in the box...but also a sweet Splish suit! 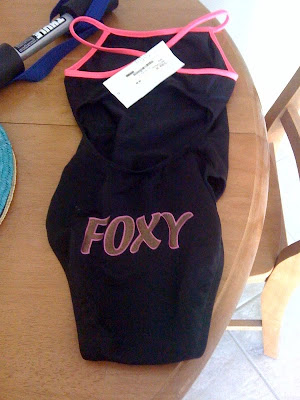 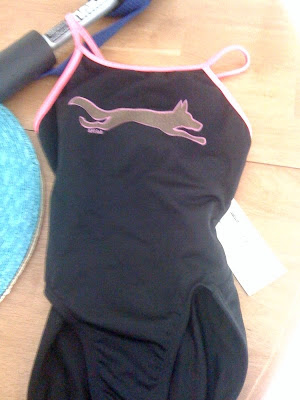 Thanks Santa!
Posted by Chloe 9 comments:

I love lululemon. LOVE IT. I have a few jackets that I purchased off of E-bay before they opened up their online store which I wear all of the time. I'm a huge fan of stretchy pants and tops that I can wear all of the time, wash 100000 times, and it still looks good. Specially since I live in FL where it does not get really 'cold' but it does get pretty darn chilly. But really. Does it have to be so expensive? $98 for a pair of pants? Ugh. I just want to cry everytime I look at their site.

BUT if you are looking for some pretty sweet hair bands to run, bike, or just to wear all of the time ...check out BondiBand. They have so many fun designs...hello Christmas gifts for almost everyone!

I finally got over my mental '17 mile' mark. I've been dealing with the guy for awhile. I have no issues with running 17 miles. None at all. My long run for the past 3 months has been anywhere from 15-17 miles. But I think boredom sets in...and I'm ready to be finished. So. I decided to break through that wall like the freaking Kool-Aide man. And I did. Rocked out an awesome 20 mile run yesterday with a 9:09 avg pace. Whoohoo! Take that wall. I came though you with ninja force!

Here are a few pictures from our last fishing venture...now our freezer is filled with some fresh fish goodness!! 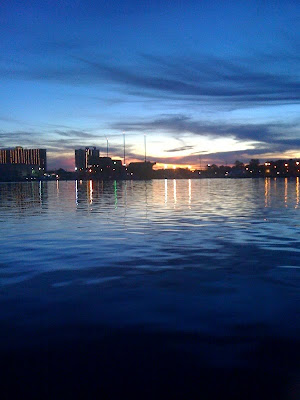 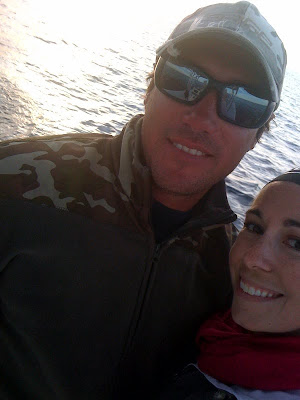 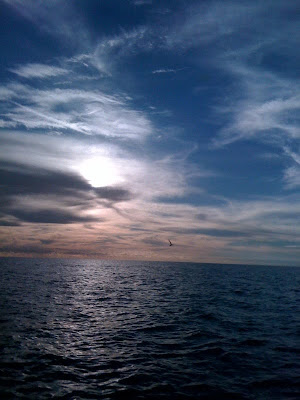 OH YEAH! I almost forgot! We got into St. Anthony's!! Whoohoo!! I've never been so exctied about a triathlon!! If you are planning on rocking it out as well.. LET ME KNOW!!
Posted by Chloe 7 comments: