Finally I got my stuff together for race report #1 (of 2).  Two Saturdays ago was White Sands Triathlon.  It's an awesome local sprint in Panama City Beach.  There is always a fun crowd of regulars and not to mention a bunch of future tri-addicts.  They have one race at the beginning of the season and another one at the end - so it's fun to see how much you've improved throughout the season.  Anyway - they have a great after party as well...at a beach bar.  With beer.

I got up bright and early to head over and set up transition.  With fingers crossed - I headed down to the beach hoping that the gulf was not rough and full of jellyfish.  And I was in luck!  I got in and swam a warm up.  It's been awhile (like 6 months) since I've put on my wetsuit - so we had go get reacquainted.  The gulf was PERFECT.  This was going to be an awesome race.

This race also has a $5 buy in.  If you opt to pay the extra $5 - as a girl you get to go in the 1st wave and then the guys who opted for buy in go five minutes after the girls followed by the normal waves.  Anytime I get to go in the first wave - I'm in!

The swim was suppose to be a 600 - but after looking at the buoys (and every ones times from the previous years) we think it was a bit further.  Anyway - the gun went off and I was in a wave with about 20 other girls.  My swim has been feeling awesome lately - so I felt great.  It was an overcast day so glare was not screwing up my sighting.  Once I hit the beach - I was the FIRST ONE OUT OF THE WATER!  Awesome.  I ran like hell through the beach bar to transition and jumped on the princess.
Swim:  12:44
T1:  1:24

The bike was 15 miles - and it is three loops around a four lane road with a grass median.  It's awesome because you get to check everyone out and see where the competition is.  So there I was.  Out on the bike course.  All alone (which was pretty cool) but then the fast guys caught me on the 2nd loop.  The first half of my bike my sweet bike computer was not working, so I had no idea how fast I was going.  But I was feeling good, so I just kept on throwing the bar higher.  I love doing local races because you see SO MANY of your friends cheering you on..... 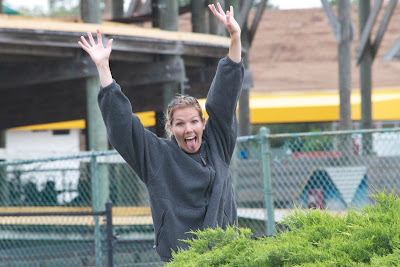 Helen being her normal goofy self 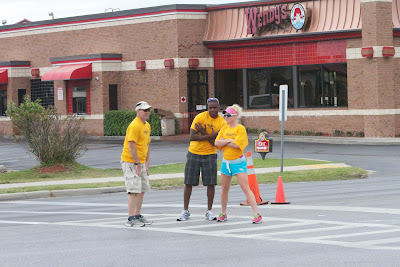 I finished up my 3rd loop and headed into transition 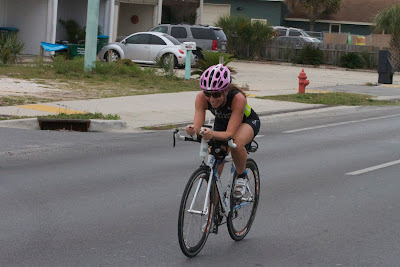 The run was a 3.1 mile loop out on Surf Drive.  I decided to go watch less for the run just to see how I've done.  Over the past few months I've really been focusing on my cycling and swimming, so I just wanted to see what I could do on the run without the garmin.  I was passed by a few guys and cheered everyone on as I was running.  (I really need work on my focus when I'm racing) But I was not passed by any girls...and I thought...holy shit...I could win this. 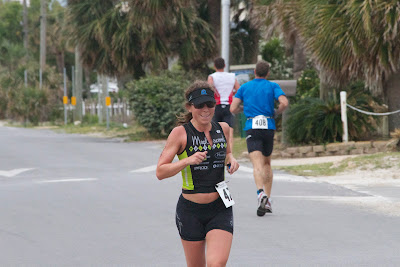 But...there is a risk you take when you take the buy in.  You don't know what is going on behind you.  Thus no one to push you.  I ended up getting 2nd to Kristen who is an AWESOME runner and opted out of the buy in.

But overall - it was a great way to start the season!
1st in AG
2nd Overall Female

One other thing I was working on is my breathing.  And controlling it when I'm out of the water and getting onto the bike.  I think I stress myself out, screw up my breathing, and throw the rest of my race off when I don't focus on staying calm.  This race I focused and felt amazing.  I'm hoping I can keep this up.

Up next - another race report.  And the 'Dirty Girls Guide to Cleaning Your Bike'

We took Stella on her first boat ride/island experience today. And she loved it!

Two race reports tomorrow! I hope everyone had a great weekend! 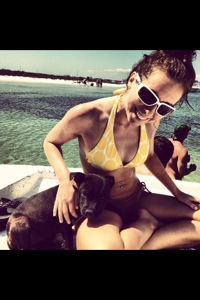 Goggles.  They are very important.  Well, at least for me.  For years I swam in the good old Swedish goggles.  Years, I mean, since I was probably 10 (and I'm 31 now).  Once I was swimming a warm up for a meet and got kicked in the eye.  Swedish goggles + kick in the eye = back eye for Chloe.  But I saw myself as a purist swimmer with my awesome $10 goggles.  I loved the way that some people were intimidated by a swimmer rocking the Swedish (at least in my mind!) and the way you actually had to put them together. 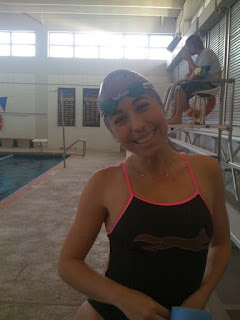 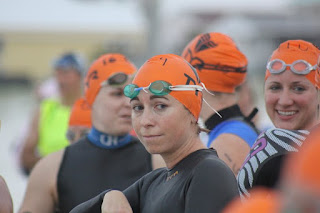 THEN I started doing triathlons and swimming in the gulf.  My purist ways did not fair to well.  And after way too many races with saltwater in my eyes and goggles flipping down, I decided to make a change.  That was the best idea ever and I am kicking myself for not making this move sooner!  I found the NERO RACE GOGGLES by BLUESEVENTY. 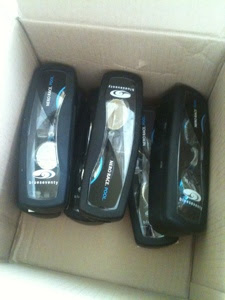 I love these goggles.  They are comfortable, stay firmly in place when you get hit by a wave, and look pretty bad ass.  Happy swimmers = better race!  So, if you are in the market for some new goggles, I would suggest trying out the Nero Race Goggles. 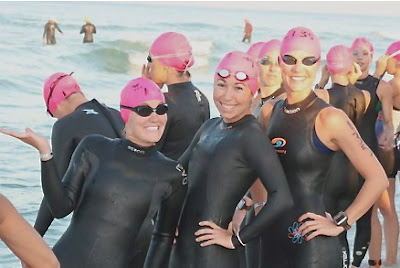 And just a little bit of fun with the GOPRO!
Butterfly - best stroke out there.  :)

On a random note, we went to see Cabin in the Woods last weekend.  It's a pretty awesome movie and not at all what you expect.  Anyway - our movie theater has Wonka Machine.  Or what I like to call - heaven for $4.00.  You get to pick what wonderful treats you want to munch on - and you can mix and match.  Are you in a chewy spree kind of mood?  Bam!  Push the button and it's yours!

And these girls were taking WAY TO LONG to make there selection! 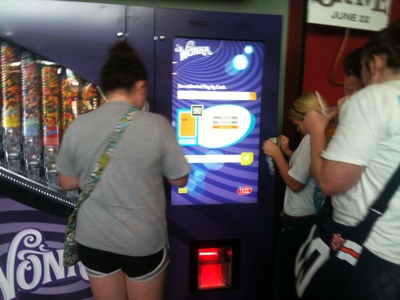 Wattie Ink vs. Rev 3 came out in full force at the pool yesterday. Just another awesome blogger friend in town! Good luck in Nola 70.3 this weekend Libby!!! 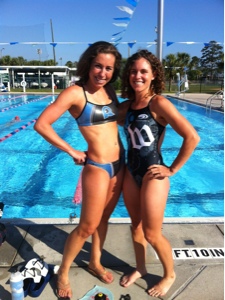 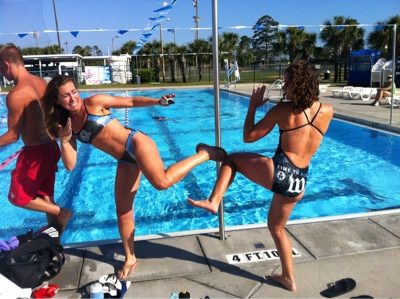 You can never go wrong

....with a pink swimskin! Have to love blueseventy! 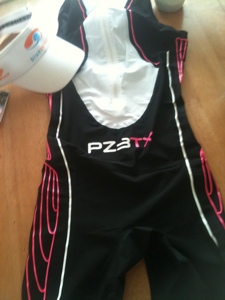 I would rather eat bugs then go to an outlet mall - especially in Orlando. But today - I had to go. I had that lulu feeling and just had to get my fix. 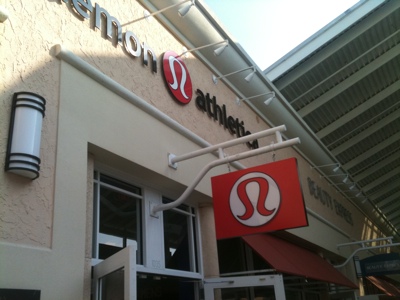 And it was totally worth it -

Hello Manifesto Shirt
(at a discount!) 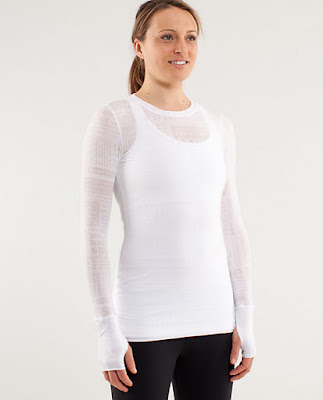 Hello Debut Tank
(At a discount!) 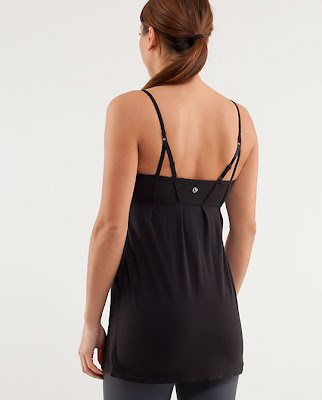 It was totally worth getting up uber early to get to Orlando in time to hit the outlet mall!

I was SO excited when Heidi wanted to come to my neck of the woods for a training weekend!  And it was the perfect weekend for long rides, long runs, AND beach time!  Not to mention - I was pumped to have a non-family member stay at our new house!

To start off the weekend - Chef Jason (AKA Big J) made us a fab dinner of fresh fish tacos and stone crab claws.  And wine.  I don't know about you, but to me that sounds like the best 'pre century' meal ever!  At 6am the next morning, Heidi and I piled all of our gear into the FJ and headed up to Vernon, FL for Tour de Ranch century ride.  Vernon has a total population of 20 people.  No joke.  But it was the starting place of our Century. This is my first 'bike' race ever.  We had no clue what to expect, but our plan was to treat it as a long training ride with pit stops.  This is the first event put on my our new Panama City multi sport team Hammer Down Multisport!

This is what the start of the century ride looked like: 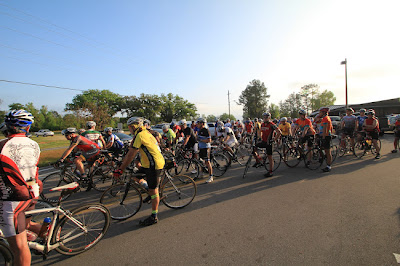 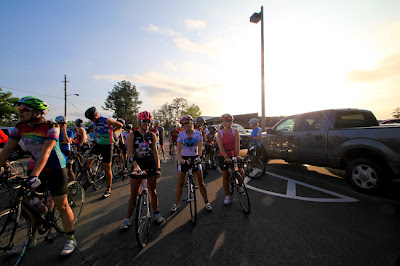 And then there is Heidi and I.  I think only 6 girls did the full century.  That just means we are awesome.
Anyway - nutrition for the day was water, Power Bar Energy Blasts (YUMMO!) and cookies.  What can I say?  I like to take advantage of the aide stations! 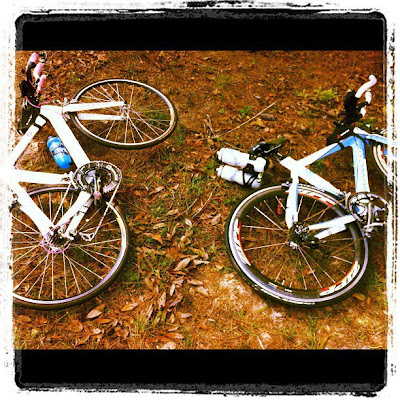 The Pink Hotness and The Princess enjoying the mile 80ish break - with the cute navy guys manning the aide station!

The ride was hilly and windy.  And yes, in North Florida, there are some pretty epic hills.  Ahhh..could not ask for better training conditions.  Along the way we saw a zoo full of animals: snakes, sheep, goats, chickens, and yes, even a pig.  But Heidi and I worked together and got it done.  The last 10 miles was directly into 20mph headwinds.  Once we saw the 'Vernon' city limits, it was like we won the lottery.  Plus we were not quite sure how long the ride was. 105?  108?  120?  We had no clue. Here we are finishing - Steve (on the right) just got done slapping my ass.  Have to love Steve. 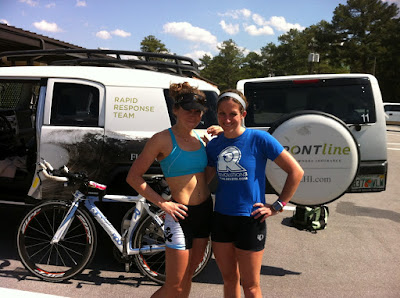 You can tell how excited we were to be finished :)

Once we got home - the cold pool was a PERFECT ice bath!

The next morning we got in a stiff but scenic 13 miles run on the IMFL run course.  You can not beat a run that gives you gulf views most of the time!
FINALLY - beach time: 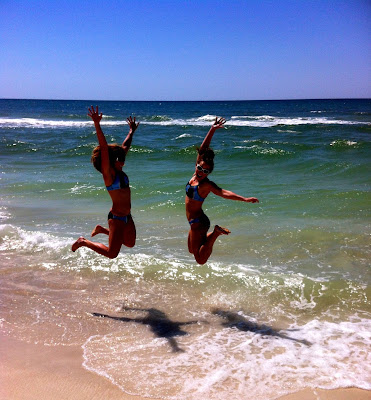 Heidi and I showing off our REV3 pride with our sparkle suits!

Sometimes I wish all of my blogger friends lived in the same place!  I could only image how much fun we would have - every weekend!  If anyone wants to come to PCB - just let me know!!

Don't forget to check out Rev3 Running Across America!  I can't even stress how important this fund raiser is for all of us.  Cancer is scary - and every little bit counts!  We run so others can live! 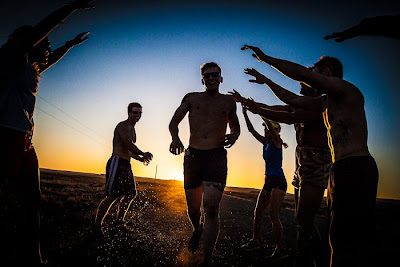 I hope everyone is doing awesome!