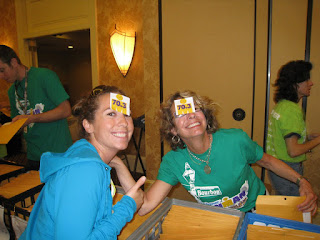 Mom and I at check in
**In mom's volunteer packet - one of the first things it said was "If athletes are irritable, don't take it personally! Ha! We thought that was kind of random!**
What a great race! I know it stunk that there where 10 port-a-potties for 3000+ people in transition and that we had to drive or take a bus everywhere. But the race was awesome. Simply put. 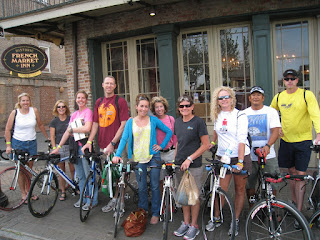 Saturday - taking the bikes to the bike party

Woke up around 4:30am - Helen, Steve, Mom and I got everything ready and hauled our bags down stairs. Total OCD to make sure that we had everything. We walked outside and it was 70 or so outside already! Waiting for the valets to bring us the vehicles (we had 9 or so people staying in this hotel)we saw clubbers still wondering around the French Quarter still drinking from the night before. Kind of reminded me of the last time I was in New Orleans....hmmm... Anyway - we followed Kent from our hotel to hopefully transition. But as we where following him he decided to cross through Jackson Square! Who knew you could drive through freaking Jackson square at 5am? Iffy about Kent's decision, we decided to take the most round about way - but eventually got to the University to the 3 billion bike party called transition.

After finally finding my bike - started chatting with the girls around me. For a few of them - this was their first tri EVER! Congrats for having balls of steel! But I got everything set up - chews and jelly beans in my bike bag, bite size lara bars in my biking jersey, and waterbottles mixed with NUUN and ready to go.

I found Lisa W and we headed to the buses for the swim start. As we where waiting, who did I notice in front of me? No one other then then Steve in a Speedo?!? Gross!, his lovely wife Sarah, and Tri-Saratops! Small world! Well, as we where chatting someone announced that if we where waiting for a bus, we would not make it to the swim for the 7am pro start. We really wanted to see Helen swim, so we hoofed it down the lovely lake Pointrain. Thankfully we had great company with Steve as we made the stroll.

My wave took off at 7:52 (or something like that). Wet suit on, I was ready to get this thing going. Hopped into to lake - and to every one's surprise, the water felt great. Kind of cool, but not freezing. The announcer sent us off - and our race began! Swimming was a normal swim - just cruised along between the buoys and the wall at a good pace. The one bad thing about an A-B swim, is that this one I could not really judge how far I've gone. So I just kept the same pace with some STUPID ASS song off of Mamma Mia that I really don't know the words to stuck in my head. And laugh at me if you want, but I don't like seeing what's below me when I swim in the lake or the bay. So when I was not breathing, my eyes where closed. But to be honest, in this lake, you could not even see your hand in front of your face.

With a smile one my face - cruised over to my bike, threw on my gear and took off after the mile run through transition. Oh the bike. How I love the bike (kept on telling myself this). We cruised through town a bit - and then ended up on a ton of random streets and highways. All I really know is that we passed the house that looks like a castle (if you've driven in to New Orleans on I10 you know what I'm talking about!) But I have to give it up for the NOPD for blocking off every road to stop traffic. It was so nice not to have to worry about traffic. 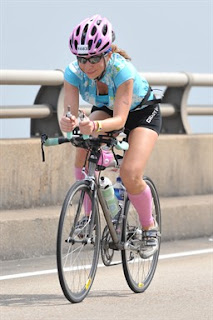 Anyway - with nutrition plan going as planned, the ride felt awesome. Very few hills - except for the very end. And no alligator sightings to my disappointment. BUT I did see some old men in red dresses passing otu water which was great. My mom was working the penalty tent right by them. She said they are apart of the Hasher group NOLA. (hashers = drinkers with a running problem!) Instead of yelling "Shut the (you know what) up" They would yell "shut the front door!". Mom got a KICK out if that. Rocking the pink compression socks - I got quite a few compliments from the 40+ year old men who where flying past me!

With 10 miles left - a levy to the right and some houses to the left of me I was so over it. The head wind was KILLING me!! And then we hit those darn bridges! I could not tell you how freaking happy I was to see transition.

But saying that this time last year, I had not even been on a road bike, I was pretty excited about my bike and how I felt!

The run was great. I felt awesome. Three hammer gu's in my bra (tropical flav with caffeine whoot whoot) I cruised. Stopped at every water stop took a swig and threw the rest on me. Ice? Well, yes! Down my bra! I'm telling you, by the end of the run, boobs where numb. I ran most of the run with an older gentleman from Colorado who was great company. 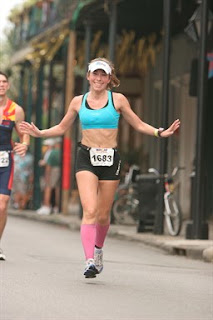 With all of the loops in the run - I saw Missy, Al, Lisa W, Jeff, Kim (the biker and runner of the 'mommy and me' relay team) Kathrine - pretty much everyone from my neck of the woods. Yelling across the road cheering everyone one is such a great feeling.

But the end was by far the best. I still get goose bumps thinking about it. Once I turned the corner onto Dacatur - the sight was amazing. Thousands of people lined the streets cheering everyone on right down until the finishline at Jackson Square. Loved it. What a great way to finish the race. 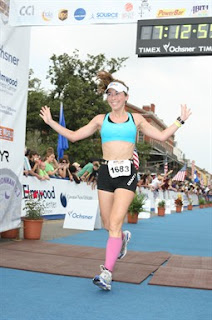 And to add icing to the cake - after I got my metal, my mom, Reice and Little Chloe where right there. 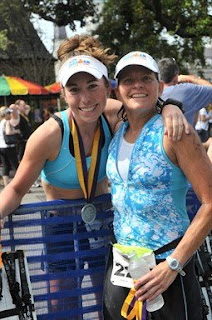 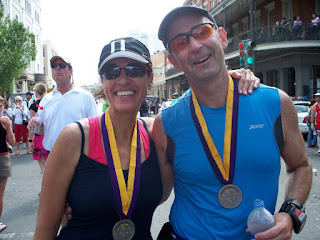 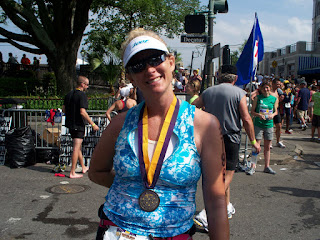 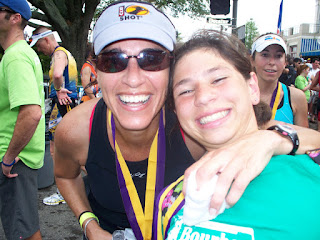 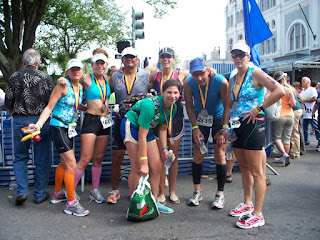 All in all - I felt and still feel awesome. No major pains. No issues at all.

Going into this with no clue - now I know what I can do. So guess what? Look to the right of your screen. I freaking signed up for 70.3 FLORIDA! Whoohoo! I'm hoping that I can shave off the 20 min and possibly be under 6 hours :) We'll see!

For this being the first 70.3 in New Orleans - it had it's issues. Running out of water on the bike, port-a-potties, busing, etc. But I'm sure those will get resolved and next year will be even better.

So New Orleans - until next time my friend. Next time when I don't have a race and I can shut down a bar and cause some real trouble!
Posted by Chloe

Congrats on an awesome race!

That rocks, great pictures! How the hell are you still smiling on the run? I usually look like I'm going to puke in my shoe! Way to sign up for another. I love that distance. It's my fav!
Congrats and recover a bit, you deserve it.

Awesome race report. That is great that you were able to finish without any major problems at all. Definitely a good sign that you'll be able to go sub-6 for your next half IM!

That is my goal too for my next half.

Congrats on an awesome race. How about that smile on the run?!?!?

I don't know if I am going to make ATL or not and Augusta is still up in the air. Spent so much in NO gotta replenish the race fund.

yes, my friends had water bottles with pennies. Glad they cheered for you too. I know they were a big help to me.

You look like you're FLYING in your running shots!

And CONGRATS on signing up for Florida!! Someone's caught the bug!....

so are you saying that the bars actually do shut down in New Orleans? ;-)

Wow, awesome job Chloe!!! I can't believe this was your first half IM, you did great! Your running photo is so cute. Ha ha!

OK, maybe you and I are swimming sisters...I hate seeing things below me when I swim, so I spend the entire swim leg (in all races) swimming with my eyes closed unless I'm breathing.

Congrats on singing up for Florida. I'd love to come out and race it, but have to pass on that one. Any chance Kansas is going to make an appearance on that list? I need a runner for my relay...just sayin....Amy and Katie will be there too....

Congrats on a great race! You look so cute in your pink socks!

Fun report...and I look forward to the next one!

Nice pictures of everybody. My event photos always make me look too serious. Yours make it look like you are having the time of your life.

Congratulations!!! Awesome first HIM. Love the report and pictures. Enjoy your recovery and good luck with the training for Florida!

I heard about the guys in red dresses, and for the life of me can't figure out how I missed them! What is wrong with me?!! That would've made my day!!!

Glad you had such a great time. Keep on smilin'...
amy

EXCELLENT JOB!!! You so rock that race!!! Felt like I was there with ya...and I knew you'd do well!!!
YYAHHOOOOOOOOOOOOOOOOOOO

Jumping up and down for u!! WTG WTG WTG!!

That is incredible! Wish I had the balls to do it! You are amazing! WTG :-)

Great RR. I'm finally back and able to catch up in blogworld. I put ice cubes down my top too! Numb b**bs, too funny, mine were too!

So glad you had an awesome race and experience!!!!!