...for Orlando. Running the Disney Marathon! Whoop whoop!! I'm heading that way on Friday for the race on Sunday. The race is going to be awesome - but I'm very excited to see (and stay) with my friend Dawn. Dawn and I go way back to the Kansas City days. We worked together - and then when I moved companies and was transfered to Tampa, she stayed with the same company but moved to Orlando. She's one of those friends where if we don't see each other for years, we just jump back into where we left off. And boy do we cause trouble. Nothing but lovlies (tasty martinis) and lots of wine. Well, this trip won't be too out of control due to the marathon on Sunday - but I love spending time with good friends. Friends that go that far back are awesome. 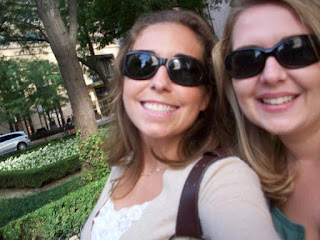 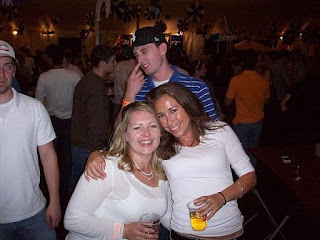 Dawn and I at Octoberfest in Chicago a few years ago. Many beers consumed.


Back to the race. Ugh. Parking. Driving. Traffic. Living on the beach where I live, the only real traffic we have is check in on Saturday around Publix. I do not miss living in the city at all. I was a very angry drivier when I lived in Kansas City and Tampa! It never fails but I stress out about not being able to find my car after the race, much less missing a race because I can't figure out where to go (even though I never have). But this isn't Disneys first round at doing this, so hopefully I won't be stranded in Magic Kingdom. But just in case - for those of you who know my mother, call her if you don't see or hear from me by Tuesday!

Hopefully if Lisa P is feeling better - she will be making the trip across the state with me to run the race as well. So at least if we do lose the car - I won't be alone!
Posted by Chloe

Thanks for visiting my blog, Run DMT. I am so nervous and excited about the Disney marathon. Lots of luck to you!

Afterwards, want to join me in my drunken crawl around Epcot?

Hi Chloe!
I linked to your blog off Denise's (rundmt). I, too, was intrigued by your blog title! My kind of gal. Wine and chocolate have often waylaid my good intentions. Good luck to you as well on the Disney marathon. If you'd like to visit me in the blogosphere, check it out at
http://dwyatt64.wordpress.com/
Denise (another Denise!)