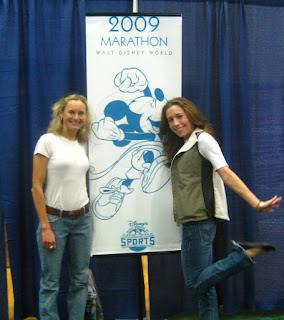 What a great race for my first marathon. Had such a great time and the support was amazing.

Started off the day at 2:45am eastern time (so for me it was 1:45!). Woke up, got dressed and headed out to door to pick up my friend Lisa who was staying right outside of the park. We took off and headed towards the park. Initially, we where going to hop on I-4 to get to Epcot, but ended up following people that looked like they where heading that way hoping that they would get us there quicker. And we where so glad that we did! I-4 was a mess - but we just cruised on through and ended up parking maybe 1/4 of a mile from the finish area. We SOOO lucked out. The fear of losing my car was gone!

We hung out in the car for awhile since we had plenty of time to join the heard of runners heading to the start. Making the trek was fun to the start. Saw so many people - many excited and many a bit freaked out. But Lisa saw a girl walking with this huge blanket wrapped around her - so Lisa made a comment to her about being the smartest girl EVER to do that. We started talking to the two ladies and found out that one was Denise!! I've been reading her blog for a few weeks so we where totally pumped up to run into each other! Check out her blog - http://denisermt.wordpress.com/ it's awesome (still trying to figure out how to make the links work on this page) But talk about a needle in a haystack! 16K + runners and I run into her! She did something that most people would not even think to attempt - run a 1/2 marathon and then the next day run a full. But to add to the craziness, it was her first 1/2 and first marathon. Ever! What an amazing accomplishment. Just proves the point that runners are a different breed. Not only are they the nicest people ever - but a bit on the crazy side as well! Awesome job Denise! It was so great ot meet you!!

So, all four of us chatted for a bit and waiting for the start. Which was awesome. Fireworks everywhere! Good old Disney pulling through. It took us about 10 min to finally get to the start chip mat but then Lisa and I took off. Unfortunately unable to say by to our newly found awesome running friends - but with all of the people it was hard to stay together! The race course was very well planned. With the amount of people, the first three miles the runners where broken up into two different routes to prevent massive congestion.

Anyway - with out boring the readers, a quick rundown of the race. We ran through all of the major parks and saw all of the characters. So much support with not only a beverage station pretty much ever mile (!!!!) but med tents and crowd support! So many local high school bands, spectators, Disney workers cheering us on. It was awesome. The parks where amazing, specially when we went through the Magic Kingdom around sunrise. Could not have timed it any better. And I also ran into Laura, another running blogger (http://absolutlyfit.blogspot.com/) at the Animal Kingdom! She has a 'Marathon Maniac' jersey. I kept on spotting them, but they where all worn by old men. When I finally saw someone around my age, I knew it had to be her! Went and gave her a hug, but kept on trucking. I can't WAIT to get the pictures back - if you read this blog, you know I cheese it up for EVERY photographer no matter how bad I feel!

But the best thing about the race was that - that I did not feel bad at all! The normal upper leg pains from running over 19 miles where there, but no GI issues, no cramps, no major blister problems. Lisa kept on my ASS about taking a GU ever five miles which is what made the race so pain free. Nutrition is SO important for long events. And I also ran with compression socks. I am going ot have to say that I swear by them now. Zensah are my fav since you can wear your own socks with them since they only go down to your ankle. But even today my calves feel, I hate to say it, normal!

Every says that the real marathon starts at mile 20. So right when I hit the mile marker I was in a zone. I knew I could do it. And I knew I was in a pace to break my goal time of 4:30. One foot in front of another. As Bree Wee says, the body achieves what the mind believes. I was feeling great and knew that in less then an hour I would be finished. And what a great feeling it was to see that finish line. Crossing that line, cheesing it up for the picture (of course!) I did it. I ran a freaking marathon.

So Disney, I made you my bitch. Until the Princess 1/2 my friend.

It was such a pleasure meeting you, but I am so sad we missed our photo opp! :-( I like to ham it up for the camera as well.

You should feel really proud of your accomplishment! I would agree that the 20 mile mark separates the men from the boys or in our case, the gals from the girls. Awesome job! Can't wait to see your pics!

Just found you through a post on Runner's World! Congrats on your race!

Woohoo, congrats, way to go! Live on the high for a while, it's great! Good job.

Awesome job!! Congrats on your PR and your first marathon. I suspect you'll remember this one for a long long time as well you should!!!

Sorry for the belated congrats! I kept waiting to read your race report until I finished mine, but I decided it had gone on long enough and I should just read yours even if mine isn't quite done. I'm hoping to *finally* finish it tomorrow.

Great to bump into you at the race - I'm so glad you said hi!