This past week has been pretty uneventful. Work, train, work, train...so on. But Jason did learn a new skill. Squid fishing. I know - sounds kind of gross. Which actually it is. Squids gross me out - kine of like jelly fish. But they are really cool to look at. Anyway - Jason heard a rumor about a certain spot to throw a cast net and pull in some of these lovely little critters. Needless to say - we had fresh calamari! OMG. It was wonderful. How knew that something that looks like this..... 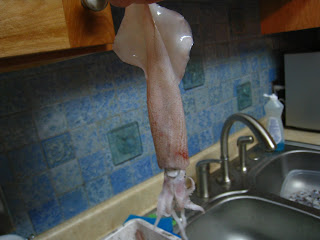 Could turn into a wonderful treat that looks like this.. 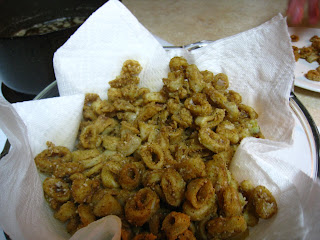 When I first started dating Jason - a friend of mine called him 'Salty'. He surfs, fishes, and can turn anything he catches into a wonderful dinner. And I like to drink wine and watch him cook. Pretty darn good couple :)

Yesterday we had another Ride/Run brick up in Bruce. According to my 'spring break license plate review' I think Wisconsin and the university of Auburn are on break this week. The weater was kind of 'iffy' but we said screw it. If it rains, we get wet :) But no rain issues, the temp was perfect and we had a great group show up. So the 50 miler was a great ride and then run felt awesome. I know I say this every time - but for riding less then a year, the rides are starting to feel better and stronger every time we go out for a long ride. I've also been working on my nutrition on the bike as well.

Anyway - some random notes about the ride. Awful car accident. We're not sure what happened, we caught the tail in of the clean up. The cars where smashed and all of the airbags where deployed. A one of the riders husbands drove by shortly after it happened and said that there was stuff everywhere and white sheets where out. Which is never good. Thoughts and prayers are with the spring breakers friends and family. Drive safely everyone!!

On a lighter note - some people where so excited about Panama City Beach, that they just could not keep their shirts on. Man. I hate it when that happens. Ha! Crazies! I guess they are training for the wet T-shirt contest!

Grandma was not paying attention - and almost took out four of us by driving in our side of the lane! Crazy Grandma! If you can't see - you really should not be driving!!

One final note about the ride - I have some new Craft tri shorts! Whoohoo! A bit more padding in the middle area then the Zoots that I have been wearing. So the 'girly bits' where pretty happy on the ride yesterday!

Picture after the ride. My eyes look like I've smoked a few pounds of the green!! 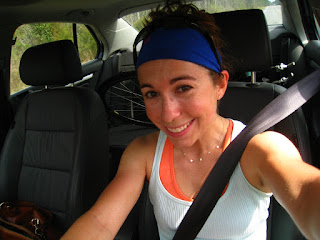 It's Sunday! Guess what is on tonight? Rock of Love Bus! This one is gonig to be awesome. Hello? They are brining in the Ex's! YES!! Drama! You know - my life is pretty drama free. So that is probably why I get sucked into these crazy shows! There is also some new show on after which I'm probably going to be addictied to as well. Ahh. I love Sunday night TB!

New Orleans is knocking on my door! I'm getting so excited! It's going to be so much fun!!! I'll start talking more about that with in the next few weeks!!
Posted by Chloe

Sweet job on that 50 miler, my 'girly parts' would be screaming bloody murder after that - sounds like your toughening up 'down there'. Props!

A drinker and a chef-I don't know a better recipe for a good marriage. And that calamari looks YUH-mmy.

Workouts sounded fun. I like your license plate game.

Chloe - I loved this blog. It was so funny (except for the car accident part, scary!). But I love your license plate game. That would be so fun to play!

The calamari looked delish - you are a lucky girl.

Can't wait for New Orleans either. Bring on the wine! I mean race....