Ok. Since my last post - I've learned quite a bit about the Canadian Saying "Bang On". I don't know if it's because I'm so freaking puking positive or that I'm from the mid west - but I see it as a positive saying! Kind of like "awesome job" you can say "Bang on job!" Well according to some of the comments - it could also mean prostitute as well as a head banger. Still. I like the saying :) Thanks Canada!!

So, Hurricane Chloe is still ravaging the gulf coast. Well, it's not a hurricane, and it's not called Chloe. But it's been raining freaking cats and dogs the past THREE days. (I've always wanted there to be a hurricane named Chloe - but I guess that would not be good since I'm a property insurance agent). But this is a good thing because it's making me taper for New Orleans. WHICH IS FREAKING A WEEK FROM TOMORROW!! So pumped. Anyway - I'm stuck on my trainer today. But I'm also cleaning house since mom and dad will be here tonight. That can count as a workout - right? So nothing too exciting going on training wise. 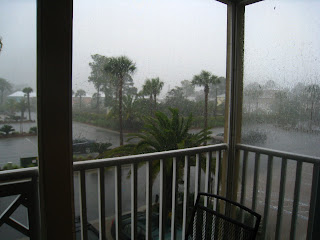 View from our patio

Yesterday was friday and I had a frustrating day at work. No detail needed, but I was so excited it was friday. It was one of those days where at 4:00 I could mentally not work. So what is the cure? Ahhh..a pedicure. Just 45 minutes in the chair can make you a new person. And I picked out a color just because of the name - "Suzie and the Lifeguard". Love it. But I went to a new place - and one look at my toes, the lady said "What do you do to your feet all day?" Whoops. Didn't realize they where that bad :) Oh yeah - a bottle of wine and dinner with Jason helped out
to :) 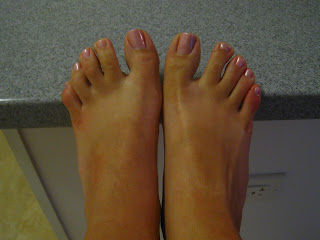 I was going through my 'old pictures' file on my computer and came across this: 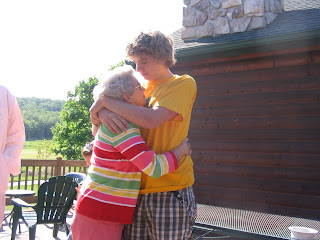 I love this picture. It's about 5 years old - my grandmother at 75 and brother at 15. This was taken an my cousins wedding. I don't know what it is, but just kind of captures the moment.

I'm not digging Rock of Love Bus that much anymore since all of the crazies have been kicked off. But remember the Panama City Beach episode with all of the kids? Well, I had dinner with my friend and her daughter who was paid $200 to be on the show! She was the one who was painting the chicks toes. Pretty random.

I hope everyone who is having a great weekend! Melissa, Amy, and who ever else is rocking New Orelans - get excited!!!
Posted by Chloe

Yeah for Pedicures! I think your feet look awesome. Seriously. Mine are a mangled mess.

LOL that Banger means prostitute. I still love it too. And somehow that makes it even funnier. Ha.

Have fun with your parents. Oh, and cleaning the house does count as exercise. I shoveled my walkway and was SO SORE! That's what I call "fat behavior."

Cheers to NOLA! I gotta get off the couch and go run.

i can't even try to get a pedicure, my feet are truley disgusting. how do you keep yours looking so good? lol. i am psyched for your 70.3! have a good weekend...

Dude - I immediately took to "Bangor" too. I think it means, 'banged it out' like 'rocked it out' What! What!

Hope hurricane Chloe works it's way out soon so you can go outside an finish your taper properly.

I love the pic of you and your bro and grandma. Very sweet.

Hi, I just came across your blog; good luck in New Orleans!

Tapering is good and totally underrated! Nice toes! My feet are a wreck too. So ugly.

Rock of Love Bus - totally bummed...Bret has to keep the psycho biatches on until the end...for our sake.

Gotta love Canada! We'll be up there in July for a week.

Nice to take some time for yourself to get pampered!! Nice name for the storm! I think its perfect because you are going to rage thru your upcoming race just like that storm!

So excited for you, I absolutely know you're going to be brilliant!! Will be sending u LOTS of positive ju-ju and waiting for ur RR.

Yo! Less than one week! I like the toes, very race-ready color. Are you ready to rock?!?!

That's a great photo, it oozes love and happiness...the types of photos that can't be staged or manufactured.

OKdokey. I start my packing soon for NO!!! Can't wait to meet you! Did I read somehting about you going out to the Kansas half too? I'll be there in cheerleader-mode (or relay racer....care to join me?)

Good luck with your taper.

oh, and I agree with your ROL comment...boring. Was it even on yesterday? Have you checked out Tough Love? I like it!
-Mel

OMG, I just had to say I heart Rock of Love Bus but also agree that without the crazies it's just not as good! And I totally remember that episode your friend was on--too funny! :)