A heard of dogs 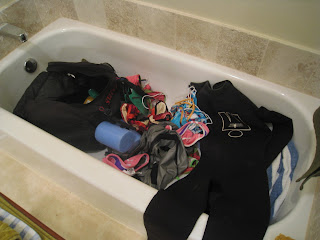 I babysit sometimes for families that are here on vacation - which fun and the money is not bad either. Well, I had the same kids most of last week. They where super cute, fun, and where in bed by 8:30 with no issues. I'm not one of those babysitters who just 'sit' there. We are either in the pool, at the park, riding bikes, doing crafts...so on. And about 7 I'll pop in a movie, and by the end everyone is in bed. But Friday was a different story for about an hour. 4 kids - 5,6,7 and 8 years old where on the edge. Tired, cranky, wound up and about ready to blow up. Dinner was outside on the patio since it was spaghetti. Food was starting to be thrown so as I was getting that issue in control - the freaking dog ran into the house. With 5 dogs behind him - two which where wet. Ugh. Control control! Must keep control! Needless to say - I rounded up the heard of dogs out. Kids played crafts and 20 min later a movie was in. Ugh. I was so happy when everyone was asleep.

This weekend workout wise was great. We had a 6am trail run in Grayton State Park at 6am on Saturday. There where 5 of us, and two of us (Fassil and I) who are not that familiar with the trials decided to pick up the pace. Due to our excellent sense of direction, we ended up alittle over a mile more then we had planned, but all in all it was an excellent 11.4 mile run.

We had amazing weather all weekend - so later that morning we headed to the beach. Kim, Jeff, 'Little' Chloe, and Reice met us out at our fav beach access so that we could do a wet suit trial run. Pam in hand, I was ready. The wet suits where cake to put on. After a few pictures, we jumped in the gulf. The gulf was pretty darn cold, but as we looked around we noticed a TON of people in the water! I guess tourists can't feel cold :) Anyway, the swim was great. We didn't go to far, but just wanted to get used to the feeling. Ahhh...I felt like I was floating! I was very uneasy with the whole wetsuit deal for New Orleans. But now I'm more pumped then ever. 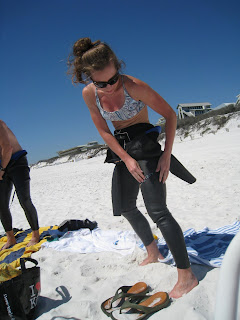 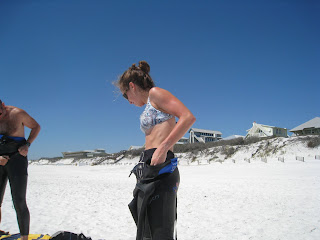 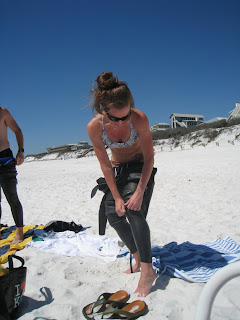 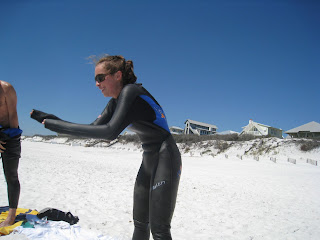 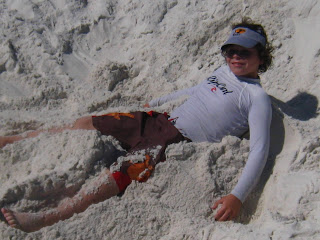 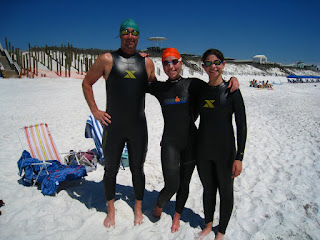 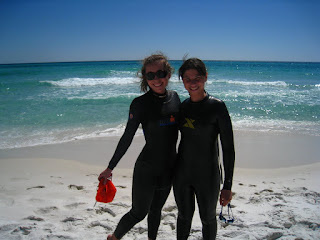 Sunday I had the best ride. We all met at Bruce at 7am. The plan was to go about 50 out and back on Highway 20. Burke was set on meeting at 7 instead of 8:30 so that we would be finished sooner. So I had to wake up earlier. Awesome. Anyway - BURK SLEPT IN AND DIDN'T EVEN SHOW! His loss. He missed a sweet ride. But it was Lisa W, Kim, Jeff, Kent, Jeff Ellis, and myself. 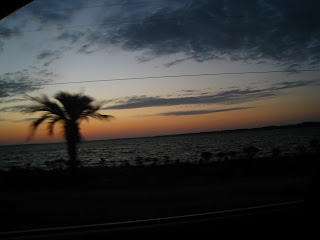 View from my car on the way to Bruce

The ride started out with a headwind and freezing!! But we just pushed through. Right when we crossed 79 the headwind seemed to get stronger. For those of you who have done IMFL - you know what headwind I'm talking about. Why is it that some areas are just ALWAYS windy? Anyway - we just pushed along. We got to a point where we could turn around and to around 40 but decided to keep on pushing through. Jeff Ellis was pulling, I was behind him, and then everyone else was behind me. Riding behind Jeff I was in a zone. Just pushing through the miles trying not to lose his wheel. Around mile 34 or so, I turned around and realized that NO ONE was behind us. I yelled a Jeff and we swung around to make sure everyone was ok. Then Kent came out of nowhere and raced by us time trial style. So we just turned around and followed Kent. Our turn around point was a few miles up the road. Once we caught up with Kent, he said the other three wanted to only do 60, so they turned around. 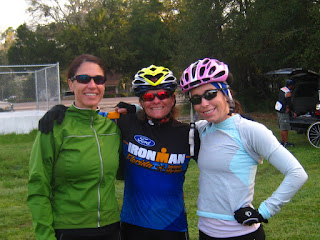 Kim Lisa and I before the Ride 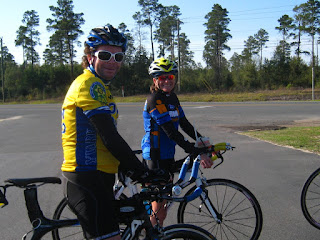 Jeff E and his sweet glasses with Lisa W 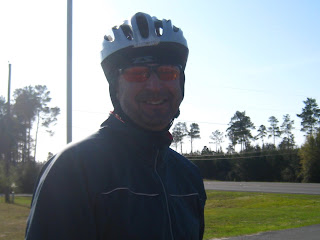 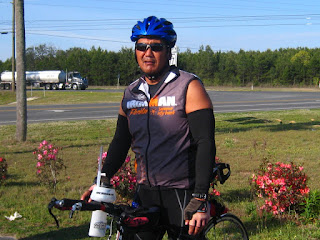 Kent "It's too early to smile" Look


So it was me - with these two AWESOME riders. But I felt great! Ready to rock out the last 1/2 of the workout. Thankfully the wind was at at our backs and I was able to keep up with them the rest of the way home. Total mileage (according my bike computer) 68.4 miles at an 18.2 avg. Whoowhoo!

One the way home I stopped at Subway to get lunch. It was full of - yes, they are still here - spring breakers. I got quite a few odd looks with my sweet biking shorts, crazy hair, and compression socks. And there was no way I could have taken off my sunglasses - allergies and wind made them look like I had smoked a bale of pot.

What a great weekend. Next weekend my parents are going to be in town - so that means cleaning this week and transforming our 'storage room' back to the guest room. My parents are so awesome and I'm soooo excited they are able to come down. Lots of wine to be drank! CHEERS!!
Posted by Chloe

Look at that white sand! So jealous of you already able to swim in the ocean, I have to wait till June!

Nice work this weekend! OH for the love of a wetsuit. I hate em too but you'll want it so better break it in right. Abd you got to hang with the spring breakers, niceee;)

Rock of Love Bus - with all the super skanks gone, it's just NOT quite as interesting. I loved it when the ex's came to visit. Ha! Too funny.

Sounds like an awesome bike ride despite that wind. I hear ya about the allergies, too (bale of weed, LOL).

You sound like a fun baysitter. Better back off those energy consuming jobs in the next two weeks though, it's almost taper time!

Have fun with your parents!

Nice ride girl. You sound like a cool babysitter. I hope it pays well. You probably keep them busier than their parents.

I guess the gulf is probably cold ot a local, but I ga-ron-tee is warmer than the sound here!

Whoa it looks like the water is warm over there... mmm. I love your Blog Title! It's awesome... I love wine... too bad you can't really run and drink in public with a bottle of wine!

Great workouts and pictures!! I'm glad you liked the wetsuit. The floating lets you swim much faster with less effort.

I love swimming in a wetsuit...you're so much more buoyant. You'll definitely rock it in NO.

Yeah for your parents visiting and drinking wine. I can't wait to do the same with mine in Sarasota! So fun.

Wait, what?! Does the water down there even get that cold? Even in the middle of summer, I still love wearing my wetsuit.

It is fun to just lay back in the middle of a long swim and find animals in the clouds. Then flip on over and keep on swimming.