Wow...so the run begins.  I was feeling great as I ran out of T2 (not a surprise since it was the first 100 yards or so fo the run).  The first water stop - there was a huge group of middle school guys saying 'It's Chloe!  It's Chloe' - and I was thinking "holy shit, who are these kids?" Then, at the end of the first aid station - there was my mother again!  She told the guys to be on the look out for me.  Next thing I know, I'm running by Club La vela - and see every single family member and friend that I knew as well as Coach Scott.  What a great feeling - to see everyone.
Nutrition wise for the run - I had one package of shot blocks, my Hammer pills, and a flask of Huckle Berry Hammer Gel (the only flav I can handle). I felt great getting off of the bike, so I was not worried just as long as I kept on taking a few sips of gel every few aid stations.    In T2 I also grabbed my arm warmers and stuck them in my pockets just in case I needed them before I hit the special needs bag.  And I am so thankful that I did.  It was a chilly night in PCB 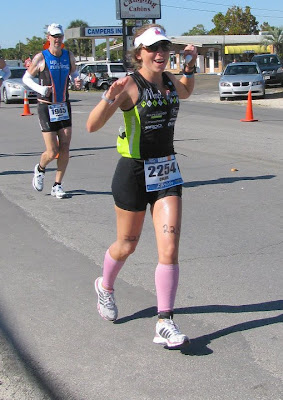 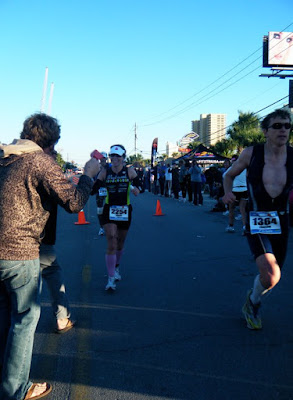 My brother..rocking the cow bell 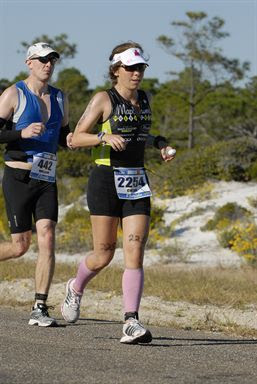 The only photo I found where I am not smiling.  :)
For those of you who are not familiar with the IMFL course - it's a two loops that goes through some of the most 'iffy' neighborhoods on the beach as well as the lonely state park.  But they had aide stations every mile that had wonderful volunteers that where more then helpful as well as several random drunk groups of people dressed up.  Specially on surf drive.  I might have to go and hang out with those ladies next year.  (please see example below from last year) 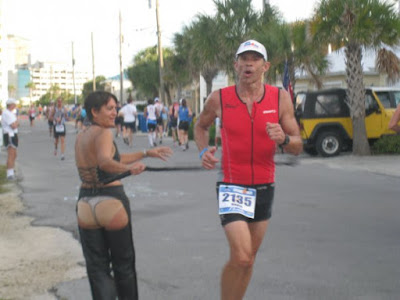 I'm not going to go through too much detail of the run - because I really felt great.  My heart rate was down and my legs felt...um...ok... and my nutrition was spot on - but this is when the mental part of the race comes in.  The IM is such a different animal then any triathlon.  You can put in all of the training needed and your body will pull you through - but the mental game is something you really can't predict.  I wish I could have 'tv-oed' my thoughts the whole 5.5 hours I was out there running so that I could go back through and analyze it.  But the best part of the run?  Right when I came into the state park for my 2nd loop, the sun was starting to go down....it started to get really cold and my mind was really playing tricks on me I hear "This is just like a training run!" And who was behind me?  Carla and Ron!  I could not be any happier to see those two at that exact moment.  I was dragging ass and really needed a pick me up.    We chatted and caught up to what has happened to us on the race (i.e. Carla's two flat tires!) and how we felt.
So for the last 5 miles we just jogged along, took in some chicken soup, and tried to get those last miles in.  Carla took off with about two miles left (to get revenge on her two flat tires) and I stayed with Ron for a bit to help him finish up his race.  He was such a great support for us while training - I  didn't want to leave when he needed someone with him.  With about a mile left - I  knew that if I kicked it in just a bit I would get under 13 hours (my goal).
So I took off.  I can't even explain the awesome feeling going right past the 'final loop go straight' sign and seeing the crowd.  It was loud, crazy and people where cheering.  All of the thoughts and feelings that had been putting  me to sleep for the past 10 months where rushing all over me.  I slapped hands and just had a huge grin on my face running that last 50 yards trying my best to take everything in.  And just hearing 'Chloe Elfrink, You are an Ironman!' brought tears to my eyes.  And who was at the end shoot?  EVERYONE THAT I KNEW.  Man, I love local races.  X was there to catch me and Jason was there to put the medal around my neck.  My whole family was there hugging and congratulating me.    Just the swell of emotion that I felt go though my body was worth every minute that I put into this race.  All of the long weekend rides and getting up at 4:30 in the morning where all worth it.  And I can't wait to do it again. 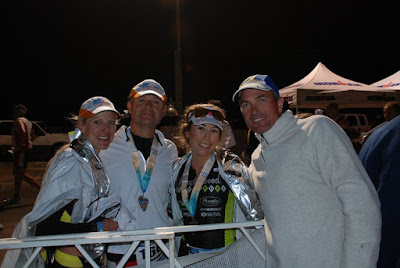 Carla, Ron, Me and Coach Scott 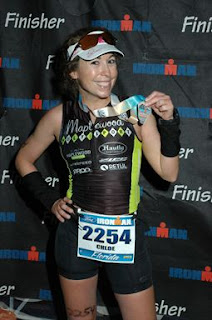 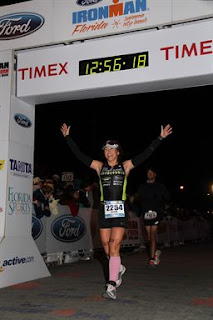 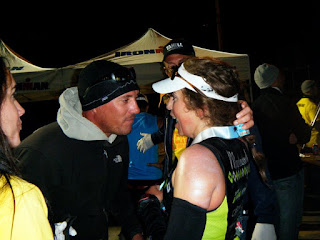 Ahh..big J.  What a trooper.
Goal Time:  4:33
Acutal Time:  5:29 (ugh)
Total time:  12:56:18
I hugged everyone - mom brought me my parka *after an Ironman - have someone there was warm clothes right at the end!* picked up the normal IM after race food (pizza and a coke) and made a beeline right to the massage tent.  No wait?  Awesome.  I was on such a high, all I really remember was the ladies asking me when I last peed and if I was cold.  I was shivering, so they got the idea.  Best massage ever.  My brother and Jason picked up my bags and bike, and we headed home.  I felt great.  I was tired, but who wouldn't be after racing an IM?  :)

Next post...tips and thing that I learned
Posted by Chloe

You did awesome Ms. Ironman! You are very lucky to have a local race where family and friends can be there to support you. That makes a world of difference in any race. Again congrats!

Congratulations Chloe, you had an incredible race. Your description of the finish brought back memories and gave me chills. Congrats again. :)

Great run report. I love hearing about an IM finish. There is nothing like crossing that finish line. Congratulations again. Looking forward to your lessons and tips.

Wasn't the ramp leading up to the upper parking lot where the finish was, the steeeeeepest ever?

Wasn't it absolute MONEY to hear "YOUR NAME, YOU ARE AN IRONMAN"

Congrats. You did awesome.

I have more friends in Arizona this weekend.

Awesome!! I loved reading about your race!!

got some tears reading this. but girl, you are NOT talking me into another one. so glad you did well. i always knew you'd do this one. next time come to louisville.

yay. Sounds like you had a rough time, but you stuck with it.

I have really enjoyed following you on this journey :) your finish photos are amazing too!

YOu are a ROCKSTAR!!! I loved reading all about it, thanks for sharing.

can't wait for the tips! so glad that it's over but i'm SO BORED RIGHT NOW! but i think i have the mardi gras half here in feb :( let me know what your race schedule looks like for next year. we have to get together at least a couple times!

Congrats on your amazing finish!! You look amazing after completing an Ironman!

Congrats, Chloe! You are an Ironman! And a badass one at that. Sounds like a tough day out there; way to stick through it and come out on top. Great report!