Since Jim and Karen (who raced Florida 70.3 with me) moved down to the beach permanently last week, they brought something else with them. Speed work! "Coach Jim" held his first speed work session that evening. It was great.

The first workout consisted of mile repeats at our 5k pace. We did the workout after work - which was VERY different from when we are used to running. #1 most of us are sitting at work all day so we're kind of stiff and #2 it was freaking hot. Living in Florida we're used to running before the sun rises in order to avoid stroke. It kind of felt like track or cross country practice back in the day - sun beating down as you are sweating your ass off. Anyway, being so freaking excited about finally doing a speed workout, all of us went out a bit harder. Whoops. I was going to try to hit a 7:30 pace - 1st mile 6:58, 2nd 7:15. Hmm...well, at least it was not slower! But everyone did awesome and a few people ran faster then they ever thought they would! What great motivation. But I'm really excited about the speed workouts and seeing the results here in a few months! 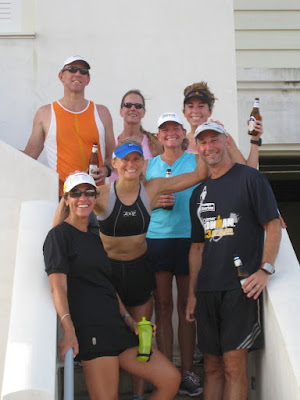 So - after the session, we did what anyone else would do. Drink beer :) It was Karen's birthday -so we all celebrated but having a few. It was great. We really have the greatest training group ever. 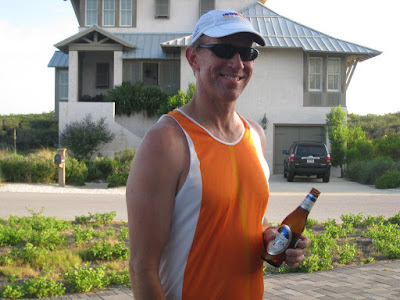 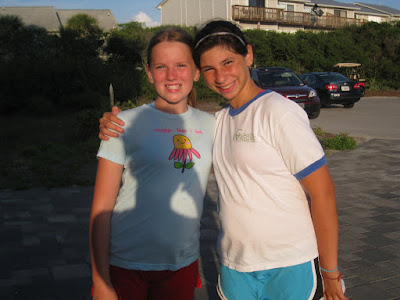 Tis the season. The season of vacationers. Can't go out to eat unless you want to wait 2 hours. And don't even think of going to the store on Saturday (check in day) unless you want to play bumper carts with families buying 3 carts of full of vacation food. But I did see a guy come off of the beach still in his trunks at 5am with a dazed look on his face. Ha! Love it.

Back to the training group real fast - most of them are starting to train for either IMKY or IMFL. And what's my next long race? Um. Not so sure. So I'm kind of feeling like a slacker right now. But I know that there is NO NEED for me to train as far as they are. But on the other hand - I kind of want to :) BUT I did sign up again to be a draft marshall for IMFL - so IMFL 2010, look out!

AND I'm thinking of a new bike. I think I've decided on the Aeryn 1 Giant . Thoughts? Feelings?
Posted by Chloe

I know jack shit about road/tri bike but I do know that one sure is pretty.

J&k+8 - never watched it, never will. But I do think if your going to invite a shitload of cameras into your house and put them in your kids faces you should be prepared to live with that knowing there will be consequences for it. That said, I agree - shut up about them. Who gives a shit. I don't!

Sweet about the speedwork girl. Super jelous about your pace. I have wet dreams about running like that.

You hit the nail on the head here. Beating your 5k pace: good. Drinking beer after: good. J&K+8 commentary: exactly my thoughts as well!

I know what you mean about the need to train--after vineman, I don't have any big races so I don't know what I'm going to do with myself haha. Just train for the social aspect of it I guess!

Very cool that you have a whole group to work out with. The bike certainly is pretty.

is that marni i see back there? she is doing imky and i am psyched to meet her.

Congrats on your speedworkout-those are some blazing splits! I hate mile repeats., But I love what they do for me. But i still hate 'em.

I have no idea what J+K and 8 is, guess thats a benefit of no TV

Bike looks nice, I don't know much about it though, there aren't many of those around Vancouver.

Good luck with the bike shopping, its always fun to do when you don't need anything, however, when I needed to shop for a new one I hated it.