Eglin Air Force Base puts on this amazing race call, you guessed it, My First Tri. It's a 200 meter swim in the bay, an 8 mile bike, and a 2.5 mile run. It's a great race for first timers - which there where plenty of. It's so exciting to see people who are racing for the first time both young and old.

Anyway - I met up with Lisa, Karen, Jim and their two kids at 5am to head over to the base (I had no idea where it was - shocker - so I had to follow them). And at 5am it was already hot and humid... 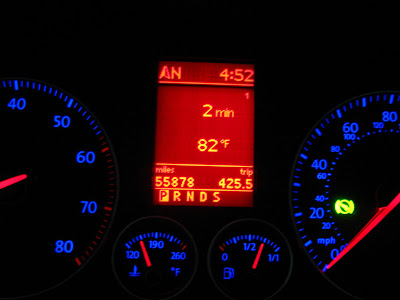 So it was going to be a hot one. Anyway - Lisa jumped into the car with me and we headed off. As we where crossing the bay bridge - I saw Jim's brand new super sweet specialized bike drop. Yes. The front part of the bike dropped, and the back part was hanging on by a thread. I just about had a heart attack. All I could picture in my head was a very expensive bike fly off of the rack and flying into my car. So we tried to call them - ugh. Cell phone not on. As we pulled up to the toll, Lisa jumped out of my car to re-clip his bike securely onto the rack. As we where getting screamed at by one of the toll both guys to get back into the car. Come on now buddy. It's 5:30 in the morning - there are no freaking cars behind us!!! (sorry, no pictures, I was too freaked out to even think about a camera!)
We get to the race and got everything set up with the help of Karen and Jim's youngest - Matthew. 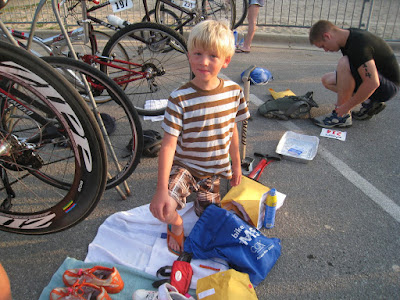 Matthew is a blast. He looked at Lisa (who was not racing yesterday) and said - "Miss Lisa, there are two ways you can tell I'm not racing today - 1. I don't have a number and 2.-ummm..I don't have a swim cap" Little kids are just too funny. And it was also Olivia's first triathlon - and she did awesome! 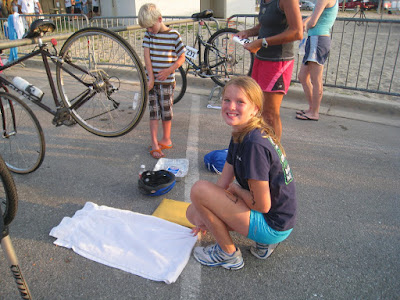 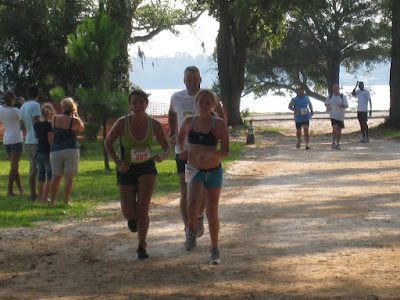 Anyway - back to the race report. The swim was in the bay - swam out to a huge orange buoy and back. Being this was a short race - I new that I had to go out fast. Our wave was every woman 25+. So I made my way up to the font and just took off - swam my ass off to get a lead and to avoid congestion. Check. I'm pretty sure I was the 2nd woman out of the water for the wave. I wanted to rock out the transition - so I was in and out with in minutes. And took off on the bike.

The bike was an out and back 8 mile ride. A few hills, but pretty awesome. The only female that passed me was Karen - who I was expecting. She is such an amazing biker. But other then that - nothing too exciting on the bike. Came back to transition - threw on the K-Swiss (best shoes EVER!) grabbed my number and my hat and took off. (How do you like that?!?! Transitions are getting better!) I love the way there where photographers right when I was running into transition - as I was trying to get my hat on and number.

The run was a 2.5 mile loop. Mostly shaded. It was hard for me to really take off and realize that it was only 2.5 miles. So at the turn around I really kicked it in for the negative split. Unfortunately - the 1st and 2nd women where out of sight - so all I had was the watch to go against. Total time was 51.14. 3rd overall female.

Karen was out for the kill that day. There is a certain someone, we'll call her Mrs. X, who lives, eats, and breaths triathlons. Her and her husband are amazing athletes and their son who is like 13 - well, they where some of the people who where pissed when the age to do Ironmen was upped to 18. But Karen had her target and was going to beat Mrs. X. Needless to say - they had to go back to the photo finish to see who won - and Mrs. X beat Karen by .10. .1 freaking 0. BUT the thing is, Mrs. X did not have the right number on (she had her son's). And she was being a very sore winner about the whole thing. Just look out Mrs. X - you have a target on your back and Karen will not give up!!! And you know what else Mrs. X - if you where not such a sore winner - we might not be so worked up by this!! 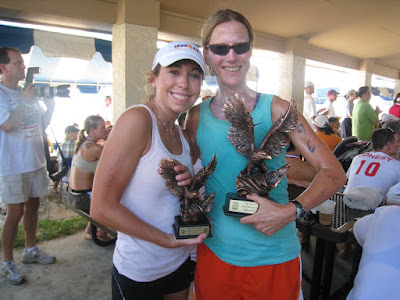 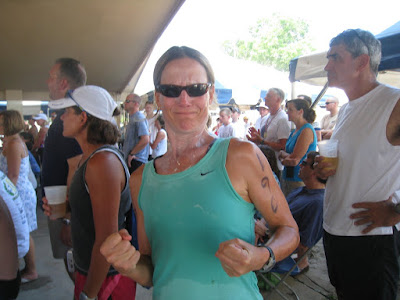 Karen and her mean face

But all of the kids did awesome - Little Chloe rocked out 1st in her age group!! And no, we did not plan to wear the same outfits! 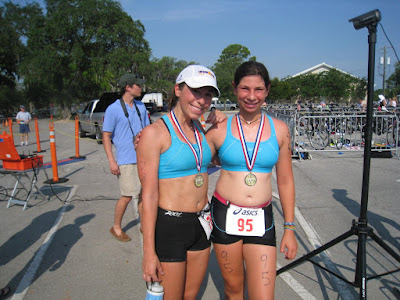 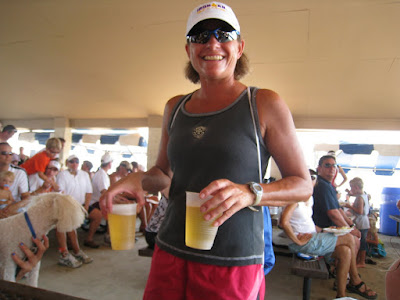 It was a great race and everyone had a ton of fun. Oh yeah - did I mention that the massage school was there!?! Oh yeah - free 20 min full body massage after the race!! Love it.

Happy Fathers day!! Even though none of my Dad's kids are around - him and my mother will have a great Sunday. I love you dad - and I can't wait to see you in August!! 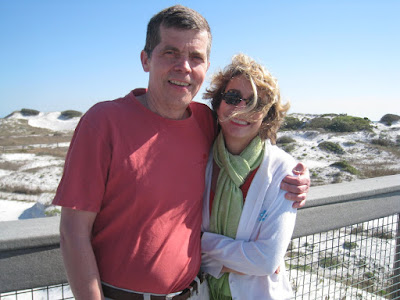 Great job at your race! The awards are awesome!
Can't wait to meet you this weekend!!
I speak at 1:30 on pre race nutrition. I'll be there before checking in and racking my bike. Let me know when you are coming. email me mrakes1@hotmail.com Where are you staying?
Have a great mon!
-marn

Congrats on the awesome race!

Congratulations!! You did amazing. Congrats to all your friends and to the kids too. What a fun day!

You all did a great job! I hate it when people are such sore sports. People just need to chill out and have fun.

Looks like a fun race. That Little Chloe is going to be one heck of a triathlete, eh?? (big one doesn't do bad either). When she wins in Kona, we can say we blogged with her in the old days..

Sounds like an aweseom race. What's up a with a grown woman being a sore winner? I always said sore winner are WAY worse than sore losers. Seriously. Grow. Up.

Congrats! Hardware is ALWAYS good, I don't care who you are. I'm very excited to hear all about your new shoes (really). Since mine are not made any longer, I'm in the market - need first hand feedback.

See YOU this weekend!

Congrats! Nice race and awesome trophy. You're going to have to clear off a nice big space for that somewhere so everyone can admire it. Congrats to all the kids too-kids are so frickin cute when they race!!!

Congrats, that looks like a fun race and the kids did AWESOME!! WTG gang!

Keep up the great work C!

{will run for margaritas} said...

Awesome race - looks like it was a ton of fun!

sounds like fun! I was there last weekend and in Destin. I so should have come to watch :) looks like you rocked it!

Nice job. And way to flex those guns!