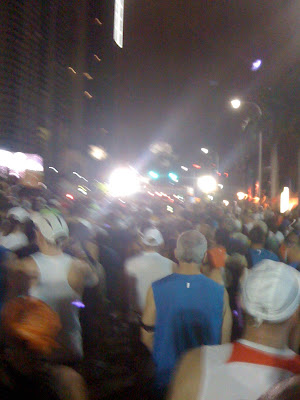 Start of the marathon.

First of all I would like to give a huge shout out to my mom. She is awesome. I love her so much to come down from St. Louis to do this whirlwind trip with me. She and my father always give such amazing support to whatever crazy hobby that us kids get into. And also a huge hug to my cousin and his girlfriend Adel for showing us around South Beach as well as letting us crash at their awesome condo.

Ok. For those of you who don't know how huge Florida is, it's freaking huge. Yes, I do live in the same state - but it's a 9+ hour drive (plus a time change thrown in there) to get from Panama City Beach to Miami. But thankfully I had good old mom to help with the drive!

On Saturday, we went to my favorite french sidewalk restaurant and had the proper 'day before a marathon breakfast' - wonderful proper French crapes with amazing coffee: 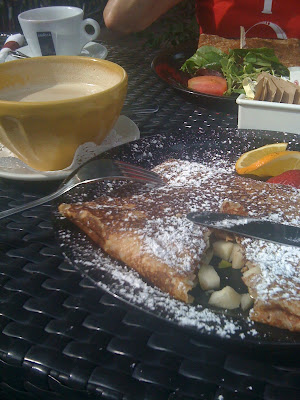 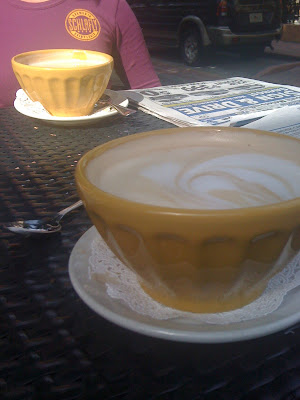 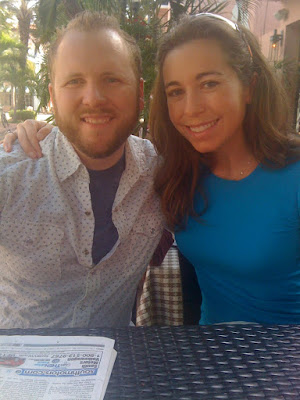 My Cousin Tim and I.

Let me throw in a quick note about Tim. He is a reporter for the

and writes amazing stories. He was one of the only American journalists allowed into Guantanamo Bay. Anyway - he somehow got his hands on a press pass for the Superbowl this weekend! Really? What!?! Can you bring a friend?

So after breakfast (or brunch) we walked on over to packet pickup and spent some time at the expo (which is always a good time). As I was expressing my love of KSwiss to my cousin - the Kswiss rep actually offered me a job :) Ha! After going through the maze of vendors, Tim and Adel headed back to the condo while mom and I walked around South Beach and had some lunch. 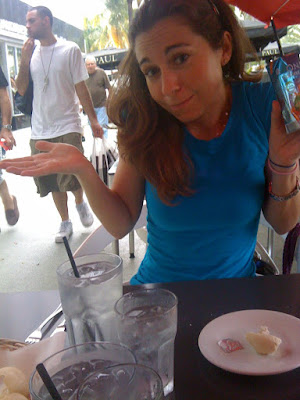 My drink at lunch. Coconut water..yumm!! 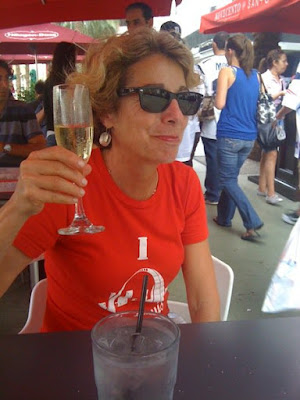 But mom's looks much better

And we also saw quite a few of these - 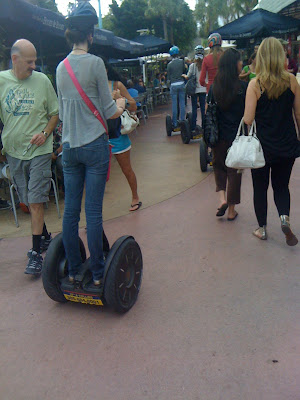 How many can you count?

So that evening for dinner, Tim had a ton of friends over and grilled fresh tuna, veggies, and his special super secret homemade hummus: 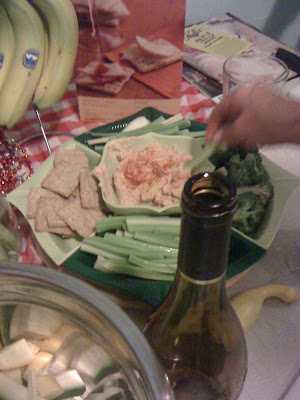 And I laid my goodies out so I'll be ready to head out of the house at 4:45am 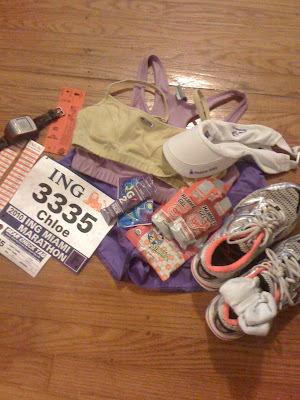 Up at at it early - Tim (bless him) got up to take me downtown at 4:45...and it was...75 out with 95% humidity. HOTTER THEN HELL. Oh well. What can I do? It's Southern Florida! But the race was awesome. If anyone wants a good marathon - try this guy out. It's flat, very scenic and also has great support. Also, the start is at the American Airlines building (where the Miami Heat play) which equals clean bathrooms! Whoohoo! No need to use a port-o-potty here! But the one downer is that there are a million half marathoners and they run with the marathoners until mile 13.

My goal was to get a sub four - but ended up running a 4:16 (per the garmin 26.58 miles - ugh. I hate running extra!) But still that is a PR for me by 11 minutes! And I felt great, well, as great as you can feel after a marathon. No injuries, just come crappy purple toenails. 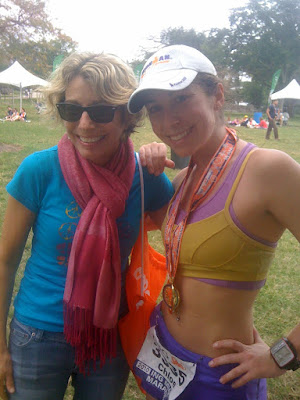 Hope everyone had a great weekend!!
Posted by Chloe

Congrats on a great PR!

Looks like you had a blast! Congrats on a great race! I love that your mom came down to cheer you on!

Congrats on an awesome race! Your outfit is great :)

WHAT! no colorful socks this time?

congrats on the PB

and yikes, you're up late on the east coast!

Congrats and you're right, your mom's lunch did look better! A PR is a PR, way to go. Really a Segway because walking is just too hard? Guess that girl just barfed her lunch and didn't have enough energy to walk any longer.

Careful...
"old mom" looks younger than me.
Is there an age limit on doing crazy hobbies?

Congrats on your PR! That's awesome. Those crepes look yummy :) and your mom is so cute. What a fun weekend!
Congrats, again!

Grand weekend race for you!!Oh how i wished you lived close, you would be a great inspiration!! But you would freeze:) So how old is your mom??:) She looks amazing!!! So you must take after her...hugs from afar. Oh and can i have the hummus receipe, maybe Mike would make it for me..

how'd you like south beach? thats where i always go when i go to miami. :)

you look great in all your pix girl. so happy for you. your mom is cute. you are blessed that she supports you like that!

Sorry South Florida couldn't deliver cooler temps and lower humidity for the marathon, but it looks like you had good food and a great time. Glad you liked the course.

You are adorable. End of story. Loved the pics....congrats again on a great race!!!!

(I get so over the end of marathon training too.)

This is a great inspiring article.I am pretty much pleased with your good work.You put really very helpful information. Keep it up. Keep blogging. Looking to reading your next post. Click to visit game. sims 4 cheats