This was the toughest race ever.  First of all - the week leading up to this race was awesome - but not really 'taper friendly'.  I had a major work function Weds-Saturday that was located in a beautiful resort in Orlando.  Now I don't know about you - but in my line of work, conventions = heels and booze.  I was good, but my feet STILL hurt.  At least I looked good! 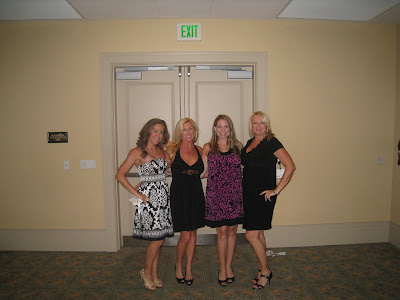 This was my first solo race.  Not the best decision saying that:
#1 It is a 70.3
#2 Six hour drive home
#3 It was hotter then HELL.  Seriously.  My mojo melted.
I got to the race site on Sunday morning and set everything up.  Met a few other awesome local racers and chatted it up.  A few of the ladies are getting ready for IMKY - so they wanted to heat training.
Swim:
The swim was in a lake that was around 84 degrees.  This was a small race, so all of the ladies took off at once.  I just stroked along - and for the most part I was all alone.  Which was kind of weird.
Total Time:  37:47 (1st in AG)
Bike:
I knew this bike would be challenging, but I was ready for it.  This is a new course for me and I was looking forward to the climbs.  We rode through several orange groves, tree farms, and some more wonderful scenery.  About 15 miles into the ride, Heather Golnick flew past me, which was pretty awesome.  But the hills where challenging and I really enjoyed it.  The odd thing was - that I was alone almost the whole ride.  Seriously.  I would get passed by a guy every now and then, but that was it.  There where a few times were I actually thought I was off the course.  Awesome.  Solo race - I could have ridden to Miami and no one would have known.
.
But remember that HUGE hill?  Sugar Loaf Mtn?  On the course I saw several local roadies and they would cheer me on.  And after rocking up one major hill - a guy yelled 'congrats for climbing the mtn!'.  HOLY SHIT!  I did not even realize that was the dreaded hill.  So I guess riding with my guys really paid off.
Total Time: 3:17 (17mph) 1st in AG
Run:
This is where reality set it.  It was about 96ish degrees out - there was little to no shade and crap aide stations (sorry -but they should have ice and stuff ready for you) It was a two loop course.  And I knew that if I was going to make the six hour drive home alive, I needed to make a decision.  So at mile seven - I dropped out.  Ugh.
BUT I did have the best cheering crowd at the end: 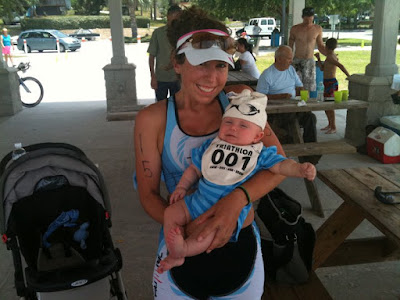 Words of wisdom.  Don't to solo races that are far away from your house unless you plan on staying an extra night!
Congrats to everyone else who raced this weekend!
Big give-a-way soon!!  Stay tuned!
Posted by Chloe

whoa what a race. Sorry you had to drop out. But hopefully you learned something from it and your next race will be even better!

I think Heather Golnick DNF'd too, which speaks volumes about the conditions that day. Brutal conditions but damn, you got 1st in the swim & bike! That's awesome. From a race report on the oly distance that was also taking place, it sounds like they had plenty for that distance but then by the time the 70.3 peeps were coming thru, they ran out of the essentials. Honestly Chloe, I think you should write them an email and bitch a little about that, b/c that's BS!

Honestly. Thank You! This post makes me feel so much better about my first and only attempt at a 70.3 last year. The conditions were the same. I know if a bad ass like you DNF I should be a little easier on myself. I mean, it's been a almost a year. Get over kristen!

Sorry about your race. On the bright side - you dominated the swim and bike!

wowzers, 1st ag in swim and bike! girl you are a rockstar. i know it was probably tough, but it was a smart decision to drop out of the fun. congrats on a fantastic swim/bike :)

and btw - you have A-MAZING guns!

Wow, that is a tough race. I know DNF-ing is very hard but you made the right decision. You will live to race another day.

Freeaking aid stations, sounds like you were on your way to another poduiim finish. Congrats on taking 1st on the swim and bike

Way to go on the first two legs and bummer about the last one! Hey.. but you looked cute doing it! Love the outfit and you did have the best cheering crowd!

Congrats on a great 2/3 and honestly a great race in general! Having to make game time tough decisions is not fun...but seems like you are in great shape so your next *cooler* race will be awesome!

wow - not the ending i was expecting! it sounds like you made a good call and i hope you are able to extract a lot of value from the front legs of the race. way to be smart.

Still a great race for you in the swim and bike! 1st - AWESOME

2/3 aint bad, especially with first AG! sorry you had to drop out, but it sounds like a good decision!

I think you played it smart. That run sounds way too hot, particularly if the aid stations aren't very well equipped and staffed. Take solace in the fact that you rocked the swim and bike.

No ice and 96 degrees in FL? FML! Id drop too even if my bday was right at the finish line. Yikes

bummer... sorry to hear about your race ;( the drive sux! ive had to learn that lesson the hard way too... i had a few close calls where i didn't know if i could make it home. Kinda scary. smart move girly :)