Well, I forgot my Garmin again. So no splits. But here is the low-down on the race we ran last weekend. It was a 1/2 marathon in Panama City Beach put on by The Girls Incoporated of Bay County . A bunch of people that I train with decided to do it mostly for a training run. A few of our runners are doing Ironman Florida on Nov 1st and the rest of us just wanted to get it under 2 hours. Anyway, I'm gonig to have to give the people who put on the race a high five for having not only a 1/2 marathon but also a 5K and a one mile fun run - and this is the first race this organization put on!!

At first I was a bit nervous because the run was scheduled to start at 8am which is pretty late for a run in Florida this time of the year. But we have a cold front pushing through making it pretty chilly at the start of the race. There where only about 300 people who signed up for the race, so it was farily small. We where all huddled together at the start. Some people where making fun of me for sporting my sports bra with shorts, but come on now, you're going to wish you didn't have that jacket on when you hit mile 2! And I was right - the race started and we took off. The sun came out and the weather felt great. We could not ask for a better day. Myself, Kent, and Kim all ran together for most of the race. Weaving in and out of neightborhoods along Front Beach Road (if you didn't know, Front Beach Road goes right along the beach). They had water and gatorade about every 1.5 to 2 miles which is a plus, but there where some intersections (being 4 lanes) where there where no police to stop traffic. Thankfully the drivers where patient with us!

We where rocking out between an 8:30 to 9:00 mile pace most of the race and just chatted away about who knows what. Around mile 11.5 it hit me. My body shut down. Kim took off (she took a GU) and Kent was a bit in front of me. The last 1.5 miles where right along the beach which was pretty and all, but the wind 'tunnel' caused by all of the condos made running a bit difficult. It felt like I was running in place. Plus I didn't take a GU. I could have shot myself after the race! Training I'm pretty consistant in staying fueled on long runs and bikes. But I how no clue why I didn't that day. Oh well. Live and learn!

About the last 1/2 mile there was a guy that passed me. As he ran by he said "Thanks for being my Rabbit". Whoa. Wrong thing to say. So I shot back "Well, I'll bet you at the end". And sure enough I did. :) I crossed finishing at (according to the Garmin) 1:58:11 Goal reached!! And even though I didn't feel to hot - I always have to cheese it up for the camera: 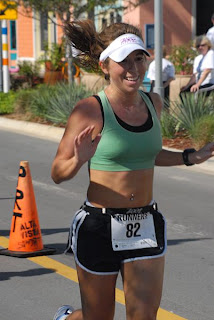 I ended up placing 3rd in my age group - which I just found out. Since this was their first race, results took a bit of time to get out :) They will be sending out personalized medals.

**Not race related - but check out this site - http://www.medals4mettle.org/index.htm - It's a great organization that takes donated metals to to people who might not be able to race, but are in their own race with life. Physicians will present your donated metal to people dealing with disease, handicaps or any similar challenge.**

But I would like to throw out a HUGE Congrats to Kim for running such an amazing race. She didn't want to do it in the first place and did not think she could break the 2 hour goal we had!!

Girls Incorporated is a great program that is nation wide. It helps girls by giving them a balanced program of supplemental education that empowers girls to live and succeed in an inequitable world.

Congratulations on you 3rd AG!!!

That dude was so wrong to say the rabbit comment. Good going giving him the spank!

Chloe:
WTG girl!! The AG finish was the icing on the cake! I can't believe you're doing RnR - yeah you! Keep us posted on your training!