You know it's spring break in Panama City Beach when -

1.  There is live music at the beach Wal-Mart
2.  Port-A-Potties randomly placed in parking lots (good for long runs)
3.  People asking me if I'm a streaker when I go to the gas station to get coffee while wearing my swim parka at 5am.
4.  You feel like an MTV extra while going to Target
And it's only week one.  No worries - I'm sure I'll have some awesome photos soon.
In training news, we had a killer time trial last weekend.  5 miles.  Out and back.  It was hot and humid.  I was feeling ok until the turn around.  Then I lost it.  My breakfast that is, all over the sidewalk.  Bananas and peanut butter.  And I still felt like crap.  Ugh.  This is getting so frustrating.  But I'm sure my run will come back.  Hopefully sooner then later.
This past week I was in Orlando for work - and I was able to spend some quality time with Bryce.  Future triathlete in training: 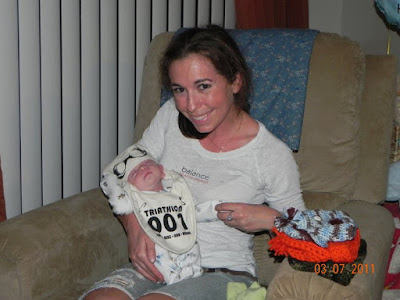 Swim - Bike - Run - Drool
And if one more friend tells me they are expecting, I'm going to drink nothing but the bottled water.  Obviously there is something in the tap water these days!
All of my thought and prayers to everyone in Japan, Hawaii, and anyone else who is effected by this scary earthquake and tsunami.  Scary stuff.
Posted by Chloe

just read your list to a friend of mine here at work who sits across from me. She grew up in PCB. She added a few more that made me laugh.
if i never throw up while training, does that mean i'm not working hard enough?? i've never thrown up as a result of training only drinking : )

Congrats on the pukie award! I really need to get more training on becaue like KC I have not throw up in training yet.

Good luck with the spring break crowd. I hope it isn't too crazy! FYI, I will be in Florida (Ft. Lauerdale) in June so watch out it might get crazy! :)

- Spring break, the memories, and a reminder on how stupid I use to be

- I love that bib, when its time for me *gulp* to be a *gulp* daddy, I am soooo buying that, then retire right before he reaches the age where he beats me in a race (ok maybe not, but will make excuses on why he passed me)

But seriously, that is everyday in New Orleans - just minus the beach and the young kids.

That is hilarious! My Mom is in Datyona and it's bike week. She is not overly thrilled to say the least! LOVE the picture with Bryce! SO freakin cute!

ha, i feel the same way! everyone is procreating like crazy. what did i miss? :)

Dang... live music at the Walmart? "Cooter Age-id Man and the Blue Hairs?" I love them...

I was searching for the dates that UH is on Spring break and I saw something put out by the Panama City Beach chamber of commerce that lists all the colleges and their student populations and their spring break week. Made me laugh.

I havn't stopped by in a while. I like the new layout. Very nice!